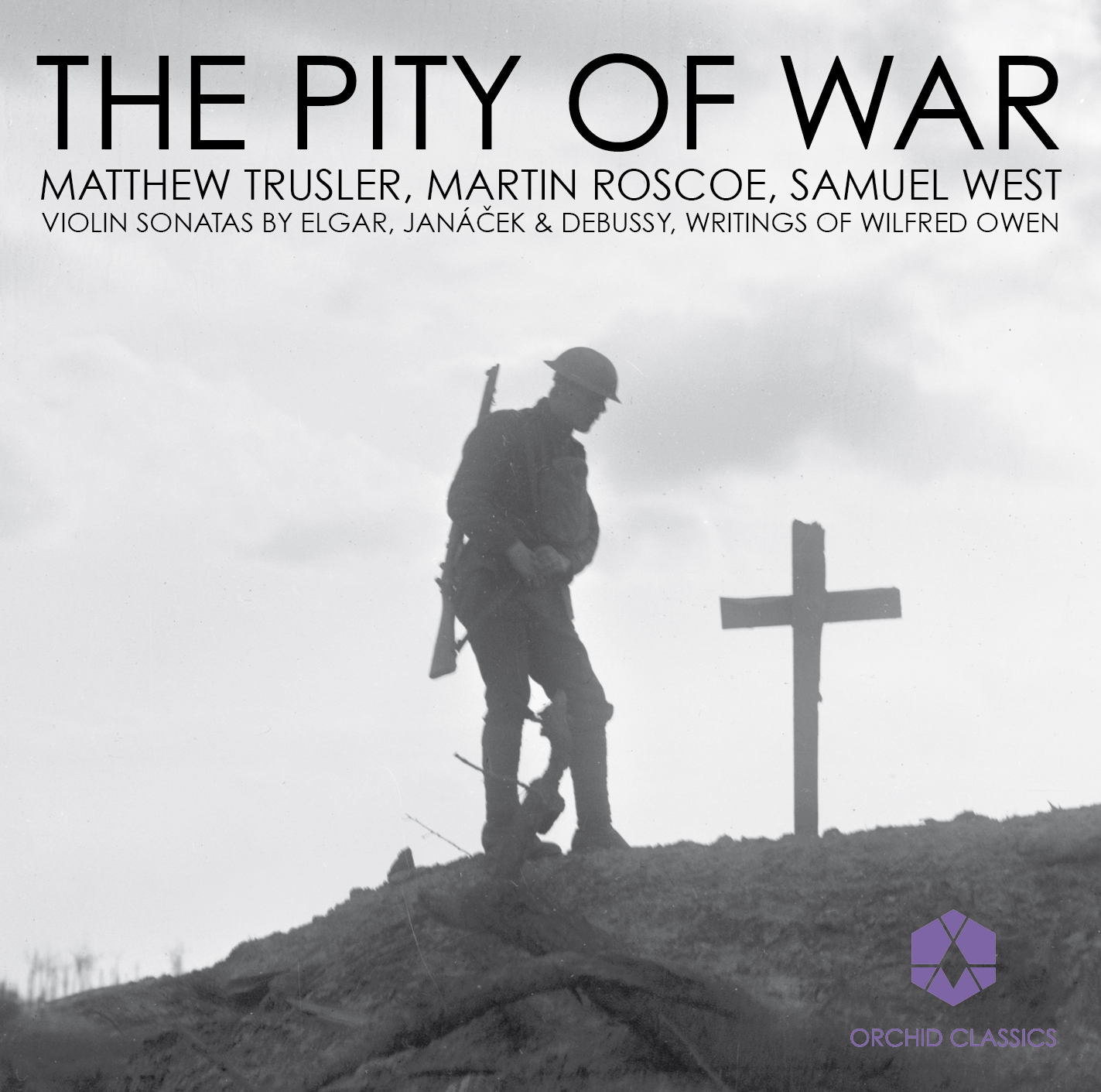 The Pity of War

Wilfred Owen (1893-1918)
Letters and poems
written between 1914 and his death, interspersed with original recordings of wartime songs

Artists, writers, poets and composers around the world reacted very differently to the horrors of the First World War. Some found their creative energies sapped by the destruction around them; others found the space and inspiration to produce their greatest work.

CD1
For this CD the young British violinist Matthew Trusler, who has been “receiving the kind of praise normally reserved for a young Oistrakh” (The Independent) joins the internationally renowned pianist Martin Roscoe in performances of sonatas by Elgar, Janáček and Debussy, all written during the Great War.

CD2
The programme for this CD draws upon the poet Wilfred Owen’s letters and poems, mainly written between 1917 and 1918. (He died seven days before the Armistice). They reveal Owen’s moral courage and humanity triumphing over the worst possible conditions.
The readings, spoken by the actor Samuel West, are interspersed with wartime songs, familiar to every soldier on the Western Front.

The Pity of War has been produced by Orchid Classics in association with the Imperial War Museum.

THE VIOLIN SONATAS OF ELGAR, JANACEK AND DEBUSSY

Edward Elgar (1857-1934)
As with so many composers of the time, Edward Elgar felt his creative energies largely sapped by the Great War. Living in London, he was hugely affected by the events unfolding around the world- as well as his own recurring health problems- and composed very little during those years. Aware of the difficulties he was having, Elgar’s beloved wife Alice determined that the only way to encourage an artistic resurgence was to return him to the countryside he loved so dearly. And so she rented a small cottage surrounded by forests in Brinkwells, Sussex, where Elgar embarked on his last major period of composing. He produced the violin sonata, several other chamber works and his last great masterpiece, the cello concerto. But this was a different Elgar, no longer the Pomp and Circumstance of earlier years, but contemplative and withdrawn, no doubt well aware of the irreversible damage being done by the war. When Alice died in 1920 Elgar practically ceased composing- she had tirelessly inspired and supported him throughout his composing life, and with her death came a virtual retirement for the last 14 years of his life.

Leos Janáček (1854-1928)
Leos Janáček was already 60 years old, and only recently experiencing the recognition he had always longed for by the time of the First World War. Having been raised during a time of growing nationalism and political unrest, he was a fiercely patriotic man. This was clear throughout his music; whilst Stravinsky and Schönberg led a noisy debate in Europe over the best systems for composing music, Janáček was more interested in creating music as a direct reaction to human events- often political ones. The violin sonata- one of his most popular instrumental works- is no exception. Started in 1914 and finished after many revisions in 1921, it was a vivid response to the horrors of the Great War, and true to Janáček’s style it brings to life the entire spectrum of emotions associated with those years. On one hand the unimaginable pain and suffering and the massive loss of life, on the other the optimism and hope instilled by, in particular, the creation of Czechoslovakia at the end of the war. Towards the end of the final movement Janáček writes a spine-tingling climax- he later described it as the “majestic entrance of the Russian liberating Army into Moravia.“

Claude Debussy (1862-1918)
Claude Debussy wrote his violin sonata in 1917, just one year before he died, and it was the last work he was to complete. Its premiere was his last public performance. He was, by this time, terribly ill with cancer, deeply depressed by the war, and suffering from a lack of will to compose. In particular this latter problem he felt so serious he exclaimed he had ‘no excuse for being alive.’ However, realising there was no other way he could serve his country during such terrible times, Debussy overcame his distress and set about composing six chamber works, ‘ to give proof, however small it may be … that French thought will not be annihilated.’ The violin sonata is melancholic, nostalgic and atmospheric- Debussy’s state of mind was clearly never far from the music he was writing. He explained after writing it that it would be interesting ‘from a documentary point of view and as an example of what a sick man can write in time of war’.
He only managed to complete three of the six works he planned before he died, but wrote on the title page of each, ‘Claude Debussy, musicien francais.’

The Pity of War was also chosen as one of the week’s 5 best CDs by the Observer.