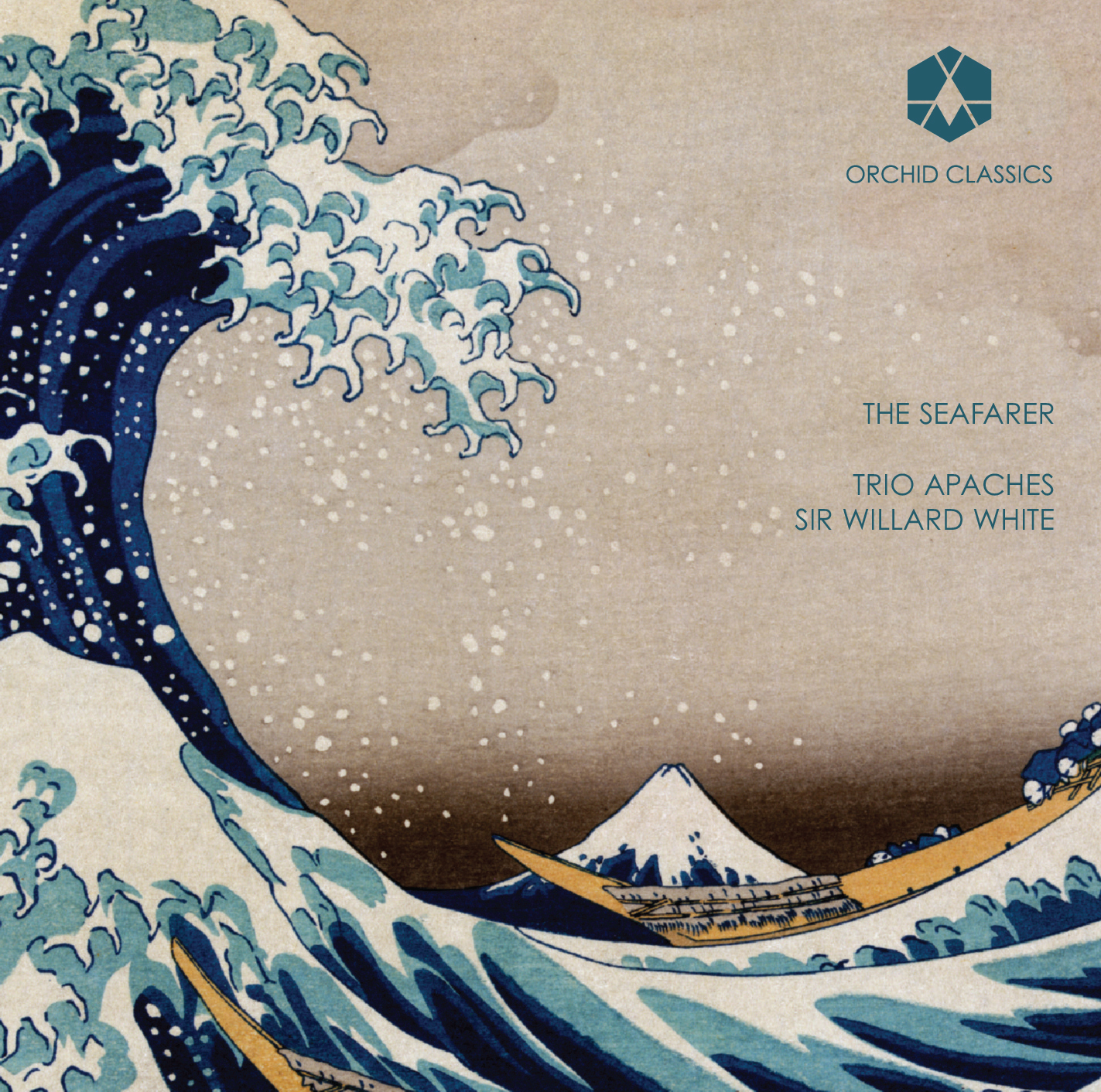 It was during Ashley’s festival in the beautiful city of Lincoln that we played our first concert together as an official trio, with a programme that included The Seafarer.

That week, while we worked on the piece and formed ideas for our new ensemble, we became increasingly excited by the idea of challenging what we thought of as conventional trio programming; seeking collaborations which would bring something fresh to the genre, and – perhaps most importantly – commissioning new works would be important elements of our future as a group.

One thing was clear from the very beginning: The Seafarer should be the focal point for our first album. We’d fallen in love with the piece (and the poem) and it represented exactly the kind of collaborative repertoire we wanted to explore. A long and fruitless search for a suitable sea-related companion piece led us to the conclusion that this was the moment for our first commission asking Sally Beamish to transcribe La Mer quickly became our favourite idea.

Our proposal was initially met with polite laughter from Sally, but we kept nagging away and soon persuaded her it was something that absolutely had to be done. Once she’d relented, Sally cleared her diary and started work almost immediately.

Working on the first draft of Sally’s score was enormous fun, even if the act of converting this most vibrant and dynamic of orchestral scores into a work which sounded as if it had always been intended as a piano trio was extremely challenging. Sally was amazingly open-minded to our suggestions, diplomatic when we proposed changes that were frankly a bit rubbish and angelically patient as she listened in on our arguments over an oboe solo that Tom was determined to claim for himself. We got there in the end and we’re all immensely proud of the final result.

The recording sessions were also quite an experience. Running The Seafarer through for the first time with Willard took everyone’s breath away and actually left Sally in tears, so we all had to stop for a cup of tea to recover. The power that Willard brought to his narration was completely overwhelming.

We’ve had an immensely enjoyable time creating this album and, above all else, we hope that comes across when you listen to it.

To arrange la Mer for piano trio was one of the biggest challenges I’ve encountered. The temptation was to represent every note from Debussy’s score, but in order to do that (in any case nigh on impossible) all three musicians would have had to be playing all the time, which could have led to an unchanging, dense texture.

I decided instead to look at the piano trio itself as a medium – particularly works such as the Ravel – and reinvent Debussy’s orchestral score with the piano trio in mind. I needed to create light and shade, and subtleties of colour. This meant exploring what strings and piano can do in terms of texture, and concentrating on idiomatic and natural techniques. This led to use of harmonics, mutes, bow position – such as sul ponticello (a glassy sound made by playing very near the bridge) – and various doublings between piano and strings, using unisons to create new ‘instruments’ – like mixing blue and yellow to make green.

Once I’d completed the score, I worked with Matthew, Thomas and Ashley, who often suggested feats of virtuosity I hadn’t thought possible, thereby opening up new possibilities previously discounted.

It has been an immensely satisfying experience to collaborate on re-creating this iconic score for these inspirational players.

La Mer, arranged for piano trio, was commissioned by Trio Apaches, with additional funding from the Lincolnshire International Chamber Music festival and the Les Amis de La Mer scheme, as a companion piece for The Seafarer Trio, and was first performed at LICMF 2013.

One of the best-loved and most versatile opera stars of the last 40 years, Sir Willard White’s illustrious career has taken him to the most prestigious opera houses and concert halls throughout the world, collaborating with conductors, directors and orchestras of the highest calibre.

Highlights in 2013 included Klingsor Parsifal at the Royal Opera House, Covent Garden; the role of Priest in the world premiere of Jörg Widmann’s Babylon at the Bayerische Staatsoper; Méphistophélès La Damnation de Faust with Opera de Rouen; Hercules Alceste at the Teatro Real; Timur in a concert performance of Turandot with Scottish opera and a new production of Benvenuto Cellini for English National Opera. Future engagements include returns to the Royal Opera House, the Festival d’Aix en Provence and Opéra de Lyon, and La Damnation de Faust in Verbier and with the Cleveland Orchestra and Charles Dutoit.

Willard White was born in Jamaica, where he commenced his musical training at the Jamaican School of Music and then went on to the Juilliard School in New York. Since his operatic debut with the New York City Opera in 1974, he has sung regularly at the Royal Opera, Covent Garden, the Metropolitan Opera, New York, English National Opera, San Francisco Opera, The Opera Houses of Munich, Amsterdam, Berlin, Brussels, Geneva, Hamburg, Los Angeles, Madrid, Paris, and at the Glyndebourne, Aix-en-Provence and Salzburg festivals. In 1989, White performed the role of Othello in Trevor Nunn’s production for the Royal Shakespeare Company, alongside Sir Ian McKellen as Iago and Imogen Stubbs as Desdemona.

On the concert platform White sings regularly with the world’s major conductors and orchestras, including the London Symphony, London Philharmonic, BBC Symphony, The Hallé, Royal Philharmonic, Concertgebouw, La Scala, Berliner Philharmoniker, Boston Symphony, New York philharmonic, Los Angeles Philharmonic and Cleveland Orchestra and he has appeared as soloist many times at the BBC Proms, including the First and Last Night of the Proms and at the Proms In The Park. He has most recently sung Mephistopheles La Damnation de Faust and Marke Tristan & Isolde act II under Gergiev; a concert performance of Pelleas et Melisande at The Verbier Festival with Charles Dutoit; Gershwin’s Porgy and Bess in concert with the Berliner Philharmoniker and Sir Simon rattle; and Bluebeard’s Castle with the Los Angeles Philharmonic and Esa-Pekka Salonen.

Willard White was awarded the CBE in 1995 and was knighted in the Queen’s Birthday Honours in 2004. He is currently President of the Royal Northern College of Music, having succeeded the Duchess of Kent in this role.

French a-pash [noun]
1. ruffian or hooligan
2. the name adopted by a group of ‘artistic outcasts’, including ravel and Stravinsky, in the early 1900s

Trio Apaches, comprising three of the UK’s most respected soloists, was formed in 2012 as the consequence of a shared desire to focus on innovative projects and challenging cross-genre collaborations, as well as to present masterworks of the trio repertoire in unfamiliar contexts.

Very much representative of the group’s intention to create projects outside the traditional realm of the piano trio, this disc features a newly commissioned transcription of Debussy’s La Mer by Sally Beamish alongside one of Beamish’s original works – her powerful setting of the Anglo Saxon poem The Seafarer, in which the Trio are joined by Sir Willard White in the role of narrator.

Built on a foundation of great friendship between three colleagues who have collaborated in various forms over many years, Trio Apaches have quickly been embraced on the international concert scene and are unanimously praised for the infectious joy and virtuosity of their performances and the innovative nature of their programmes. They have made numerous appearances on BBC radio 3, most recently in a live BBC lunchtime concert from the Royal Conservatoire of Scotland in a recital juxtaposing Copland with Tchaikovsky.

‘The performance is virtuosic…’ (The Strad)