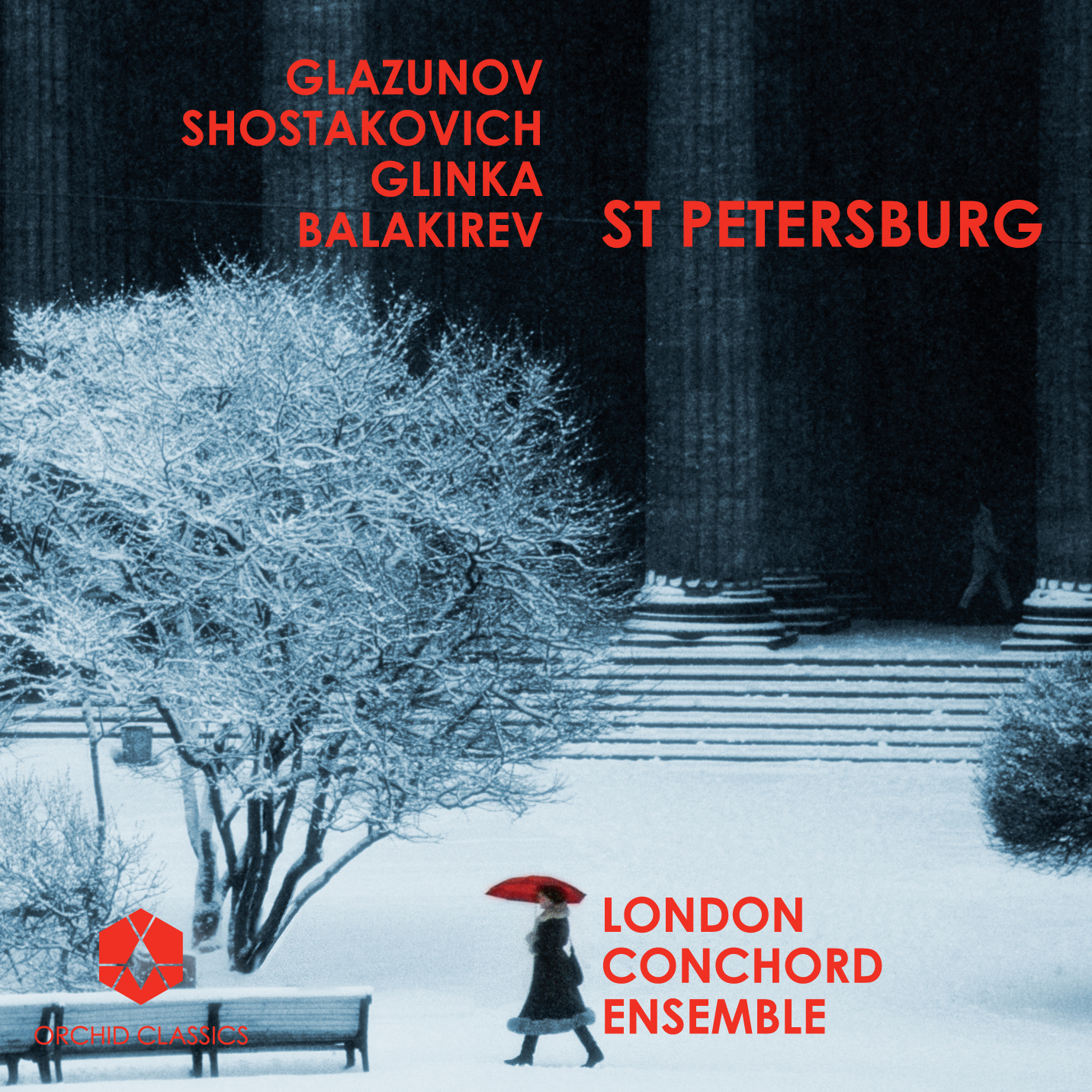 This recording brings together works by four composers at the forefront of St Petersburg’s musical life in four succeeding generations during a period when St Petersburg was indisputably at the centre of Russian artistic culture. Each significantly influenced the life and work of his successor, whether by the example of his compositions, or by direct practical intervention in his early career. The works recorded here also share a particular characteristic: they are all works by young men. They are vital, exuberant, colourful, and full of ideas. However, none is now widely performed, and to our knowledge one of them (the Balakirev Octet) has not been recorded since the advent of stereo sound. They deserve to be better known.

Mikhail Ivanovich Glinka (1804-1857) came from a landowning family near Smolensk. According to his reminiscences, he was brought up by his grandmother as a virtual prisoner in her room until the age of six. At this time, the only music he heard was Russian folk songs sung by his nurse, and the sound of bells from the nearby church: his first composition was an imitation of bell sounds on a copper basin. At the age of 13, Glinka was sent to school in St Petersburg. By that time, the city already had a musical scene comparable to that of most Western European cities (it is worth noting that during the nineteenth century, the premieres of Beethoven’s Missa Solemnis, Verdi’s “La Forza Del Destino”, and “The Damnation of Faust” by Berlioz all took place in St Petersburg). As a schoolboy and young man, Glinka not only heard masterpieces by Beethoven and Haydn, but met and had several lessons from John Field, and heard new operas by Rossini. After leaving school, he became a frequenter of St Petersburg’s salons, to which his skills as singer, pianist and composer allowed him ready access.

Towards the end of the 1820s, Italian opera became a particular obsession of Glinka’s. His compositions from that period include a number of songs in an Italian style to Italian texts, as well as salon pieces and imitations of Russian folksong with simple piano accompaniments. In 1830, he moved to Milan to develop his compositional interests and technique, where he remained for 3 years before eventually returning to St Petersburg. The Trio Pathétique dates from his Milanese period. In it his various musical interests coalesce. One hears the influence of bel canto and Italian opera; the piano figuration and decorative flourishes of John Field; and, very faintly, an echo of Russian folk song.

Glinka himself gave two contrasting explanations for the use of the title “Pathétique” for the Trio. In his reminiscences, Glinka (who was a notorious hypochondriac) wrote that at the time of the Trio’s composition he was ill, in “misery and discomfort”, “deprived of appetite and sleep”, and fell into despair, which he expressed in the Trio. But the Trio was also published with a preceding epigraph in French, which suggests a more metaphysical explanation:

“Je n’ai connu l’amour que par les peines qu’il cause” (“I knew love only by the pains which it causes”).

In line with its title, the Trio has a stormy and declamatory opening and closing in the tragic key of D minor. However, the prevailing mood is not tragic. It is better described as tender, passionate, lyrical – and playful, particularly in the fleet-footed second movement scherzo. Glinka writes beautifully and idiomatically for the unusual combination of instruments. The influences of Rossini, Bellini and John Field are perhaps a little too evident for a strongly distinctive compositional voice to be heard. The most striking and individual aspect of the piece is its sonority, for which Glinka has an exceptionally refined feeling. The wide spacing of voices, the unusual instrumentation, and the use of very high registers in the piano, all give the piece a sound that is at turns deep and expressive, and of crystalline clarity. (For that reason, we prefer to record it in its original instrumentation, rather than in either of the more frequently heard versions for piano trio, or for clarinet, cello and piano).

Both in his development of a distinctive national style, and in his compositional technique, Mily Alexeyevich Balakirev (1837-1910) was by his own admission indebted to Glinka (though more to the later Glinka, the composer of “Ruslan and Ludmila”, than to the earlier Italian-inspired Glinka of the Trio). That indebtedness began when Balakirev first moved to St Petersburg at the age of 18, and was introduced to Glinka, who took the young composer under his wing. Balakirev was already a fine pianist, and Glinka was sufficiently impressed by his musical talent to give him sole charge of the musical education of his favourite niece! The Octet was one of the early pieces that Balakirev showed to Glinka at this time. In his memoirs, Balakirev wrote:

“Glinka was amiably disposed towards me, and I would come to him mostly in the mornings to show him my latest works, among which was also the Allegro from the Octet… Glinka appraised them favourably and gave me valuable advice as to the instrumentation. And so it was until his departure for Berlin, where he left on April 27, 1856, never to return.”

Only one movement of the Octet survives (the opening Allegro), which is in traditional sonata form. As might be expected from a young virtuoso, it is a piano concerto in miniature. The other 7 instruments have most of the tunes, but are often treated en bloc as a quasi-orchestral “tutti”, while the piano provides most of the interesting texture with a riot of Chopinesque flourishes. The movement is more than merely an exercise in piano note-spinning, however: Balakirev shows a real lyrical gift in a series of attractive themes – in particular, a beautiful second subject with Russian folksong character.

Alexander Konstantinovich Glazunov (1865-1936) was the direct heir of Balakirev’s brand of musical nationalism. Indeed, Balakirev was responsible for Glazunov’s first significant foray into composition. Glazunov’s mother, who was a piano pupil of Balakirev’s, realised that her son had exceptional musical talent, and took him to see her teacher at the age of 14. Balakirev recommended that Glazunov should have formal composing lessons with Rimsky-Korsakov. These were crucial to Glazunov’s development, although they lasted for less than two years, because (according to Rimsky-Korsakov), Glazunov progressed “not from day to day but from hour to hour”.

Glazunov’s String Quintet op. 39 is an excellent example of his early technical skill. Written in 1891 when the composer was only 26, it is a big, colourful and cohesive Romantic work which combines something of Tchaikovsky’s lyricism with a mastery of counterpoint and idiomatic writing for all the string instruments. The sound world of the piece is deep and rich, assisted by the incorporation of a second cello rather than the more usual viola. Glazunov’s intricate part-writing distributes the main melodic material amongst all the instruments, with the viola and cellos being particularly prominent. For instance, the beautiful main theme of the first movement, a broad and warm allegro, is first spelt out by solo viola: and a cello solo sets the dark and elegiac mood of the slow third movement, where the work comes closest to Tchaikovsky in sound and atmosphere. The work’s other two movements – the scherzo and finale – incorporate material that is more distinctively “nationalist” in style. The second movement, with its playful pizzicato opening, has more than a touch of Russian orientalism about it: and the finale’s main theme is a barnstorming Russian dance.

Glazunov was not only important to music in St Petersburg as a composer, but as a teacher and administrator. He took up a professorship at the St Petersburg Conservatory in 1899, and remained associated with the Conservatory for almost 30 years, over 20 of which he spent as Director. He was an extraordinarily dedicated and indefatigable Director, who showed paternal concern for needy and gifted students. Those students included Dmitri Dmitriyevich Shostakovich (1906-1975). In fact, Glazunov was responsible for Shostakovich studying composition in the first place. Shostakovich played the piano to Glazunov in 1919. Glazunov decided that Shostakovich could unusually bypass any preparatory courses, and enrol at the Conservatory immediately to study composition as well as piano, presciently saying to Shostakovich’s mother: “I cannot ever remember ever having had such gifted children as your son within the walls of the Conservatory”.

“Testimony” (the controversial Memoirs of Shostakovich, as supposedly related to Solomon Volkov) records Shostakovich’s love for Glazunov, and the close connection between Glazunov and Shostakovich’s family, as well as a wealth of stories about Glazunov’s extraordinary musical memory, eccentricity, and alcoholism. In fact, Shostakovich’s father, who had access to reserves of state alcohol at a time when none was available to the public, supplied Glazunov with vodka. This was no joke – Shostakovich’s father was risking his life. According to “Testimony”:

“Father could have got into serious trouble. Alcohol was worth its weight in gold, even more…It was like life itself, and people caught in business involving alcohol were deprived of their lives…Glazunov used to come to our house for it. It was done with the greatest conspiratorial air possible. When I think about it now my pulse rate goes up, as if I were watching a frightening film.”

The Trio No.1 in C Minor op. 8 was written in 1923, while Shostakovich was still studying at the St. Petersburg Conservatory, and was dedicated to Tatiana Glivenko, a girl with whom he was in love. It is a one-movement piece in a free, fantasy-like form, which is held together by a process of Lisztian thematic transformation (thus, the slow and mysterious opening theme almost immediately metamorphoses into a scurrying, uneasy presto). What is extraordinary is how strongly Shostakovich’s individual voice can already be heard in this work by a 17-year-old. Its motoric rhythms, clean textures, and astringent harmonies within a basically tonal framework are all characteristic of his mature compositions. The Trio has some rough edges, and at times an attractively full-blooded romanticism that Shostakovich would discard: but it could not be written by anyone else. One also has the impression that in this work Shostakovich was happily tweaking the nose of his conservative composition teacher, Maximilian Steinberg, with various iconoclastic touches. For example, the Trio opens with a Gb major chord, the most distant possible harmony from its key of C Minor, and wanders somnambulistically through different tonalities in its opening section, only reaching its “home” key with its second subject. It is a work of huge self-confidence by a student who knew that he was a major talent.

“The ensemble clicks perfectly, the playing seemingly effortless and a regard for precision never stifling the musicians’ natural feeling for life and breath.”
BBC Music Magazine

The 2011/2012 season sees Conchord celebrate their 10th birthday with performances throughout the UK including a lunchtime recital at the Wigmore Hall for BBC Radio 3 and a birthday celebration at the Wigmore Hall in an evening concert later that year.  Conchord will make their debut appearance in Spain in 2012 with a concert at the Teatro Villamarta in Jerez and the 11/12 season also sees the continuation of their highly successful residency at Eton College where they combine masterclasses with evening recitals.  The ensemble enjoys regular collaborations with guest vocalists and recent concerts at Windsor Festival, Newbury Festival, Winchester Festival and Chelsea Festival have included Dame Felicity Lott, Sue Bickley, Andrew Kennedy, James Gilchrist and Katherine Broderick. Conchord are ensemble-in-residence at Champs Hill. Conchord has received wide critical acclaim for their recordings of Poulenc, George Crumb, Thuille and Bach on the Sanctuary Classics/ASV, Black Box and Quartz labels. Their latest CD was released to critical acclaim in May 2010, receiving an outstanding 5 star ‘CD of the Week’ in the Saturday Telegraph. Released on the Orchid Classics Label and entitled “St Petersburg” the recording includes chamber music by Glazunov,  Shostakovich, Balakirev and Glinka.

‘… the Conchord Ensemble plays with an aplomb, sensibility and purposefulness…’  (Geoffrey Norris, The Daily Telegraph: 1 May 2010
CD of the Week)

‘The London Conchord Ensemble puts us all in debt in offering this repertoire’ (International Record Review, June 2010)