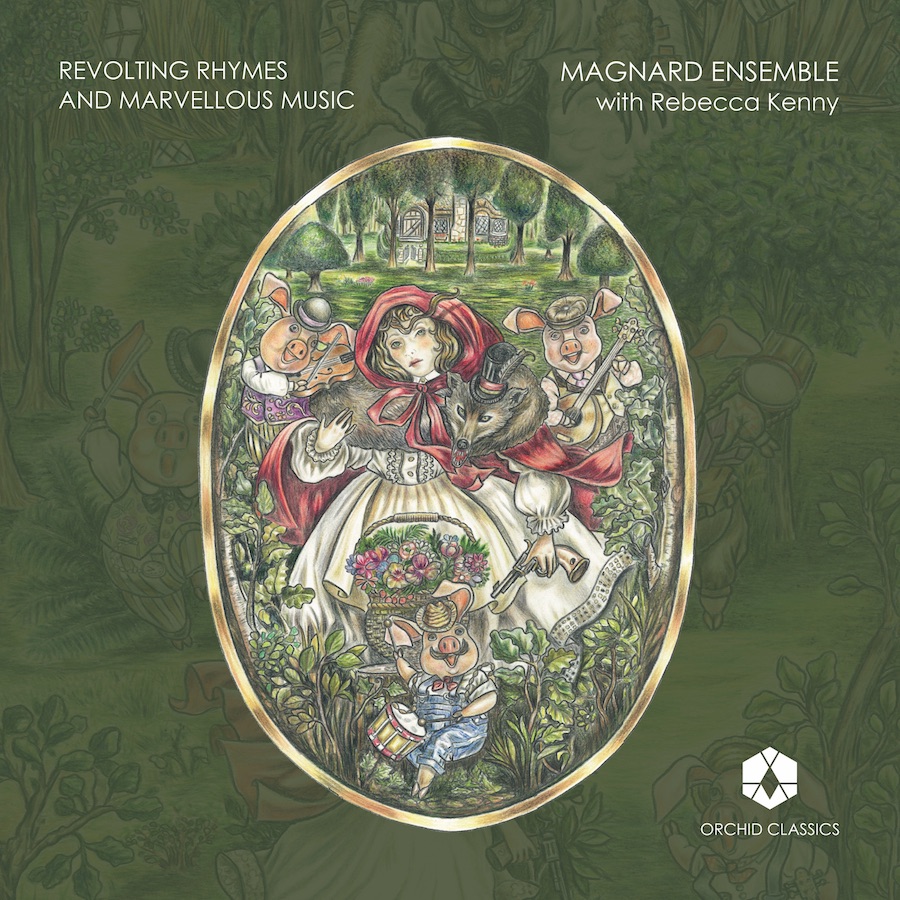 Like most fairy-tales, the story begins in an enchanted forest, but the three stars of the story turn out to be the opposite of what you might expect. Each character has its own melody which transforms stylistically when the characters’ true identities are revealed, fulfilling the opening warning that “Nothing is ever quite what it seems…”! There are a number of musical quotations from well-known classical pieces, such as Wagner’s Tristan and Isolde and Beethoven’s symphonies – try to spot them all!

Dirty Beasts was written in 1988 in response to a commission from Aquarius. The three verses, taken from the collection of the same name, show Dahl’s love of the macabre and the grotesque: they are centred around animal characters, and all are to do with eating (and what is eaten is very much to the point). The verses are performed continuously, connected by short musical interludes.

The Three Little Pigs was jointly commissioned by the Residentie Orchestra, Holland and the Basel Symphony Orchestra, Switzerland, the latter giving the world premiere in 2004. The piece exists in several versions with a variety of instrumentations, and Patterson created this version for wind quintet, piano and narrator especially for the Magnard Ensemble, who gave the first performance in 2015 at the Wigmore Hall, London.

Again, the story is full of humour (vividly reflected in the music!) and has unexpected twists in true Roald Dahl style. Patterson even plays Dahl at his own game, giving each pig a distinct  musical character, with the third pig having a surprising Spanish twist – this pig is a particular favourite for Magnard Ensemble! There are more famous musical quotes for you to listen out for too – perhaps a little Mozart?

Actress. Storyteller. Clown. Rebecca trained at Brighton drama school, The Academy of Creative Training, as well as spending time studying in Paris at Ecole Jacques Lecoq and with Philippe Gaulier. Rebecca is a theatre-maker based in London, producing comedy, cabaret and physical theatre performances. She is also the singer for London-based ukulele band Watch Out For The Bear.

Paul Patterson is one of the most versatile, successful and internationally respected British composers of his generation. His works have been performed by all of the major UK orchestras, many orchestras abroad, eminent ensembles and international soloists, through whom he has also built up a substantial discography. He has been the featured composer at many festivals both in the UK and abroad, and has also been a BBC Composer of the Week. His writing is often challenging but also idiomatic and consequently many of his solo works have been chosen as set pieces for international competitions throughout Europe.

His substantial oeuvre is stylistically varied; he is known for his sympathetic and often humorous writing for instruments, making a popular and successful name for himself in choral, brass, organ, orchestral, concerti and children’s music. Music lovers worldwide enjoy his music as it never alienates, but creates an enriching experience that draws in both audiences and performers.

Butler’s works are widely performed and broadcast both in the UK and abroad. He has received commissions from, amongst others, the BBC, the London Sinfonietta, the Schubert Ensemble and the Brighton, Cheltenham, Canterbury, Norfolk & Norwich, and Presteigne festivals.