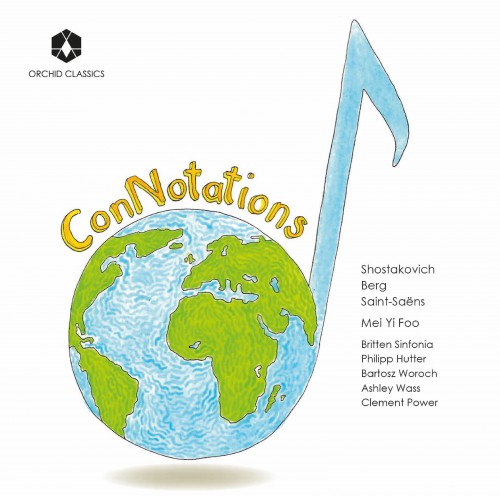 In this recording I salute Shostakovich, Berg and Saint-Saëns for their mastery as weavers of musical codes. I succumb to playing their cryptic game; a musical game of hide-and-seek. They hide, I seek. The notations imply something else; some revealing, some deliberately misleading. By disguising himself within tunes by other creators, Shostakovich’s chameleon-like transformation tricks me as I chase him throughout his first piano concerto. Berg presents three puzzling themes in his Chamber Concerto, and hides them in a mathematical web of variations, Viennese waltzes and atonal codes. “All good things…”, he says of these themes which represent the names of himself and his close friends Schönberg and Webern. Even the purest and friendliest impersonation in Saint-Saëns’ Carnival of the Animals has a sardonic message hidden between the “long ears of the donkey”.

So dive in with me beyond the surface of notations. What lies beneath reveals an ocean of secrets and underlying connotations.

What is the basic artistic theme of this concerto? …I am a Soviet composer. Our age, as I perceive it, is spirited, heroic and joyful. This is what I wanted to convey.

We know far too much about Shostakovich now to take any of his public statements at face value – especially not a press interview given in December 1933, a few weeks after the Leningrad premiere of his Concerto for piano, trumpet and strings. Amongst friends, he told a different story. Lev Oborin expressed disappointment at the concerto’s lack of a piano cadenza. “This is not a concerto like Tchaikovsky’s or Rachmaninoff’s, which runs all over the instrument to show that you know how to play scales” retorted the composer. “It’s a bird of a different feather”.
This concerto, in short, is a lot of fun. It begins with a raspberry, and however brisk the dialogue, the trumpet is always on hand to deflate pomposity – whether with a sarcastic fanfare, or a delightfully inappropriate new theme. And if the bluesy toy funeral march that ends the first movement and the Lento’s haunted slow-waltz hint at darker emotions, the preposterous finale blows away any lingering melancholy.

Chamber Concerto for piano and violin, with thirteen wind instruments.
If it became known how much friendship, love, and how many spiritual references I have smuggled into these three movements […] the representatives and defenders of “Neo-classicism” and “New Objectivity”, the “Counterpointists” and “Formalists” would rush to attack me, outraged by my “Romantic” language…
So Alban Berg introduced his Chamber Concerto to its dedicatee Arnold Schoenberg, in February 1925. It would be another two years before it was finally premiered in March 1927. Berg wrestled not just with the challenges of balancing such an unconventional ensemble, but with his own intensely developed sense of musical structure. Anyone who reads about this work quickly learns of its hidden codes; the way, for example, that Schoenberg’s, Webern’s and Berg’s names are encoded into the notation.

Little of that is audible; at least on first hearing. Instead, enjoy the unfolding of the three movements Berg shaped with such care: a theme (scherzoso – “joking”) with five variations, an arch-shaped Adagio, and a big rondo finale, introduced by a mountainous double-cadenza for the two solo instruments. Bear in mind that this is, in the deepest sense, Romantic music. And that as Berg himself put it:
…the concerto is the very art form in which not only the soloist and the conductor have the opportunity to show off their brilliance and virtuosity, but the composer can, too.

The Carnival of the Animals

“It is possible to be as much of a musician as Saint-Saëns” said Franz Liszt. “It is impossible to be more of one”. But Saint-Saëns is still probably best known for a piece that he wrote on a whim – his “Grand Zoological Fantasy” Le carnaval des animaux, composed in a small Austrian village in February 1886. (Saint-Saëns needed a break from a concert tour of Germany, and he loved animals – his black spaniel Dalila accompanied him everywhere).
A suite of fourteen miniature tone-poems, composed for 11 miscellaneous instruments (including two pianos), and filled with private musical jokes (a lot of these beasts sound suspiciously like French composers of the period), it was first performed at a private gathering in Paris on 9 March 1886. Word spread that Saint-Saëns had written a comic masterpiece, and at a later performance, so many audience members showed up that 200 people had to stand. At that point, Saint-Saëns decided that the joke had gone far enough. Although he allowed private performances for the rest of his life, he left instructions that The Carnival of the Animals was to be published in full only after his death.
Richard Bratby

Mei Yi Foo is the winner of the 2013 BBC Music Magazine’s Best Newcomer award. Recognised internationally as an innovative performer, she is equally at home with contemporary music as she is with the core classical repertoire. A prolific concert performer, she has appeared with the Philharmonia Orchestra, English Chamber Orchestra, Seoul Philharmonic, London Chamber Orchestra, Helsinki Philharmonic, Fort Worth Symphony, Bretagne Symphony, Remix Ensemble and the Malaysian Philharmonic, garnering rave reviews from The Times, Independent, Neue Zürcher Zeitung, SRF broadcast, Guardian and Klassik magazine.

A native of Malaysia, Mei Yi resides in the UK after completing her studies at the Royal College and Royal Academy of Music in London with Yonty Solomon, Chris Elton and Alexander Satz. Currently Mei Yi holds a teaching position at the Royal Welsh College of Music and Drama.
During her free time, Mei Yi can be found scuba diving in the depths of South East Asia.

Polish-born violinist Bartosz Woroch is a prize winner at major international competitions such as Pablo Sarasate, Michael Hill and London’s YCAT. As a soloist Bartosz has appeared with major orchestras including the Royal Philharmonic Orchestra, Auckland Philharmonic, Bern Symphony Orchestra, the Bournemouth Symphony and Polish Radio Orchestras with conductors such as Michael Tilson Thomas, Libor Pešek, Łukasz Borowicz and Henk Guittart. He has also lead, directed and appeared as soloist with the Sinfonia Cymru, culminating in the orchestra’s first ever international collaboration, ‘Small Nations Big Sounds’ Festival, of which he was Artistic Director.

Bartosz performs worldwide at venues including the Wigmore Hall, Barbican, Royal Albert Hall, Lincoln Centre, The Palais des Beaux-Arts, Festival Radio France, Edinburgh Festival Fringe, Verbier Festival, and collaborated with a variety of artists such as Pekka Kuusisto, Sting, Caroline Palmer, Uri Caine, Nicholas Daniel, Louise Hopkins and award-winning director Tom Morris. In 2016, he released his debut CD, ‘Dancer on the Tightrope’ featuring 20th century works for the violin.
A committed chamber musician, Bartosz is the leader of the Lutoslawski Quartet and has given recitals throughout Europe with a recent residency at IRCAM in Paris.
Bartosz studied at the Paderewski Academy of Music in Poznan, the Hochschule der Künste Berne and at the Guildhall School of Music & Drama, where he was guided by Marcin Baranowski, Monika Urbaniak-Lisik and Louise Hopkins. Bartosz is currently a violin professor at the Guildhall School of Music & Drama.

Swiss trumpeter Philipp Hutter is the prize winner of numerous awards, including the “Yamaha Foundation of Europe”, the Lions Club Competition Germany and the German “Jugend musiziert” Competition. In 2010 he won the audience award at the Musical Olympus Foundation Prize winner’s concert. Having studied with Max Sommerhalder in Detmold, he finished his Master Soloist programme with Frits Damrow in Amsterdam and Zurich.

As a soloist, Philipp played extensively at major concert halls such as the Berlin Philharmony, the Salle Gaveau in Paris, the Hermitage in St. Petersburg, the Wigmore Hall in London, the Tonhalle in Zurich and the KKL Lucerne. At 23, he was appointed principal trumpet of the Lucerne Symphony Orchestra.
Philipp continues his performing career as a soloist and chamber-musician, appearing with ensembles such as the Lucerne Chamber Brass Ensemble and gives masterclasses at the universities of Sao Paolo, Tallinn, Medellín, the international Tokaj Summer Institute and the Hochschule für Musik Luzern. In addition to that, Philipp enjoys playing jazz.

Described as an “endlessly fascinating artist”, Ashley Wass is firmly established as one of the leading performers of his generation.
Ashley’s watershed moment came in 1997 when he won the London International Piano Competition (the only British winner so far). He has also been a prize winner at the Leeds Piano Competition, and is a former BBC Radio 3 New Generation Artist.

Ashley has received great critical acclaim for his recordings of music from a wide range of styles and eras. His survey of Bax’s piano music was nominated for a Gramophone Award and his discography boasts a number of Gramophone ‘Editor’s Choice’ recordings.

Much in demand as a chamber musician, Ashley is a frequent guest of many international festivals, and he is the Artistic Director of the Lincolnshire International Chamber Music Festival.

Ashley is a founder member of Trio Apaches and a Professor of Piano at the Royal College of Music, London.

Britten Sinfonia is one of the world’s most celebrated and pioneering ensembles. The orchestra is acclaimed for its virtuoso musicianship, an inspired approach to concert programming which makes bold, intelligent connections across 400 years of repertoire, and a versatility that is second to none. Britten Sinfonia breaks the mould by not having a principal conductor or director, instead choosing to collaborate with a range of the finest international guest artists from across the musical spectrum, resulting in performances of rare insight and energy.

Mei Yi Foo is the winner of the 2013 BBC Music Magazine’s Best Newcomer award. Recognised internationally as an innovative performer, she is equally at home with contemporary music as she is with the core classical repertoire. A prolific concert performer, she has appeared with the Philharmonia Orchestra, English Chamber Orchestra, Seoul Philharmonic, London Chamber Orchestra, Helsinki Philharmonic, Fort Worth Symphony, Bretagne Symphony, Remix Ensemble and the Malaysian Philharmonic, garnering rave reviews from The Times, Independent, Neue Zürcher Zeitung, SRF broadcast, Guardian and Klassik magazine.
As a new music advocate, she works regularly with living composers including Dai Fujikura, Richard Baker, Chris Harman and Unsuk Chin, and appears at Berlin’s Ultraschall Festival, Punkt Festival in Norway, Arnold Schönberg Center in Vienna, Southbank’s Park Lane Group, Poznan Spring and NDR’s Das Neue Werk in Hamburg. Following a season of international debuts at the Lucerne Festival, Huddersfield Festival, Hong Kong City Hall and Istanbul’s CRR Concert Hall, Mei Yi’s new season will continue with performances with Sinfonia Varsovia, Porto Symphony Orchestra, National Taiwan Symphony Orchestra and at the Royal Festival Hall as Philharmonia Orchestra’s featured artist for the series ‘Music of Today’.
A native of Malaysia, Mei Yi resides in the UK after completing her studies at the Royal College and Royal Academy of Music in London with Yonty Solomon, Chris Elton and Alexander Satz. Currently Mei Yi holds a teaching position at the Royal Welsh College of Music and Drama.
During her free time, Mei Yi can be found scuba diving in the depths of South East Asia.