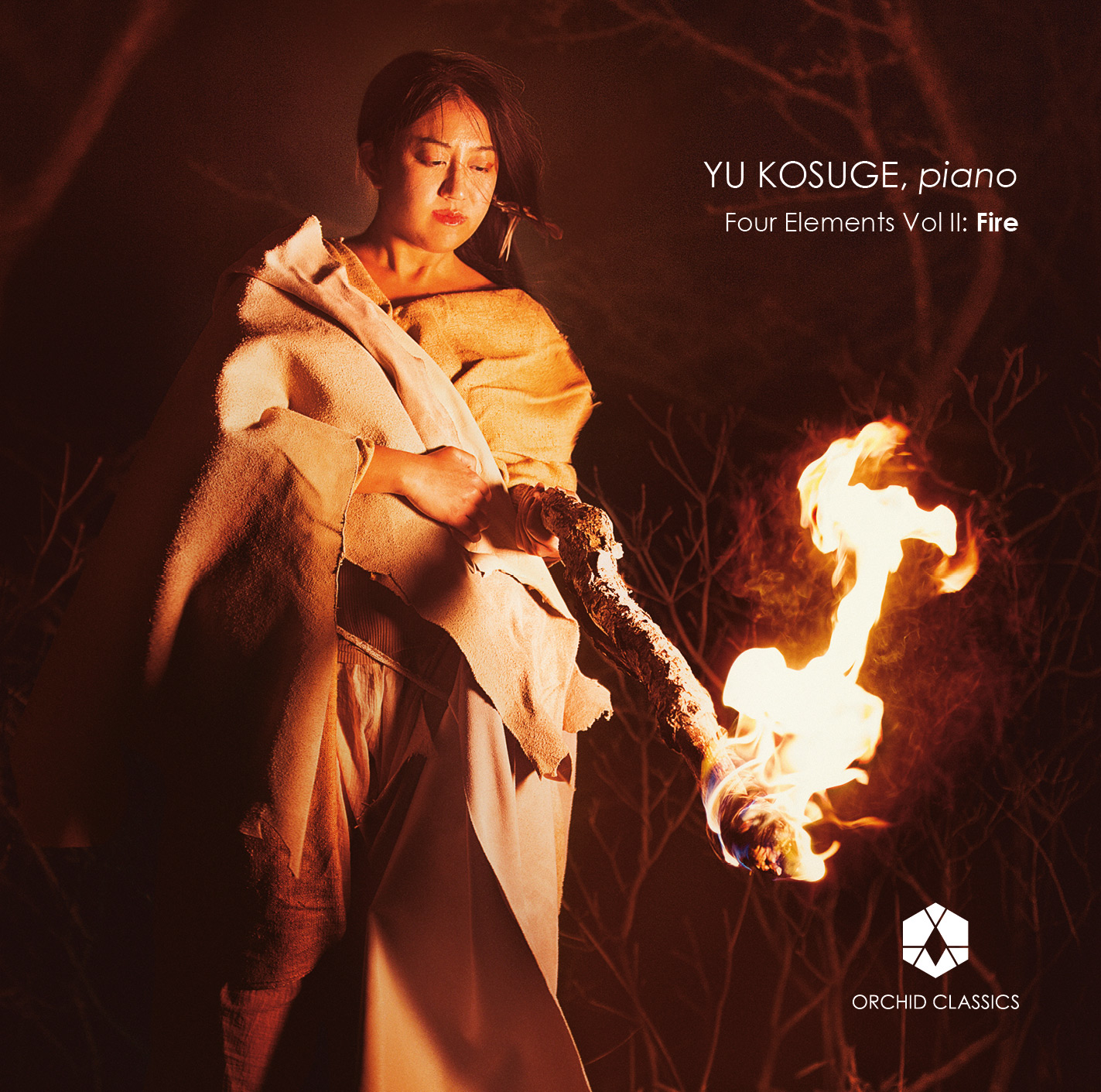 15 – Khorovod (Round Dance) of the Princesses

16 – Infernal Dance of All Kaschei’s Subjects

In Greek mythology, the Titan god Prometheus stole fire from the gods and passed it on to humankind. The fire, which brought with it warmth and light, gave power to humans and marked the beginning of human civilization.

This album begins with pieces reflecting the warmth of fire. The fireside, which warms your body and soul, has a feeling of dreaminess and nostalgia.

But fire also brings about disaster. The German word for hell, “Fegefeuer”, when literally translated, means “cleansing fire”. Fire can symbolise the devil, or it can chase away bad spirits. It is also connected with passion and climax, and is often used as a symbol for sensuality and ecstasy.

By showing these many different aspects of fire, I want to lead the listener through different stories as told by composers, from the Romantic to Contemporary periods.

When I was searching for pieces on this theme, many were coincidentally from around the time of World War I (1914-1918). Whilst every composer experienced the shadow of war in different ways and from different countries, and often expressed this in their music, they have one thing in common: an experimentation with harmony, which developed from tonal to atonal.

Pyotr Ilyich Tchaikovsky (1840–1893) is one of the most popular Russian composers of the late 19th century whose remarkable sense of melody and orchestration has captured hearts all over the world.

The Seasons is a cycle he wrote for a monthly magazine in St. Petersburg called ‘Nuvellist’. Every month he wrote one piece with reference to a poem. The piece for January is called At the Fireside, inspired by a part of a poem by Pushkin:

A little corner of peaceful bliss

The night dressed in twilight;
The little fire is dying in the fireplace,
And the candle has burned out.

Whilst in the recurring theme you can imagine the family gathering around the fireside in the cold Russian winter, in the middle section you also feel a longing for warmth.

Max Reger (1873–1916) is a German composer most known for his works for organ, but he also wrote many chamber works, songs and piano pieces, which are rarely played. The harmonic instability and polyphony in his compositions make his works very complex and difficult, but his sensitivity and broad palette of expression are exceptional. Some works are undeniably beautiful and romantic, some are very humorous, but there are also some that are explosive and experimental.

Dreams at the Fireside was written in 1915. During World War I, he was writing a piece for choir and orchestra for the fallen soldiers, which, to his disappointment, was not accepted by the publisher. He fell into writer’s block for a while and moved to the countryside, to Jena in East Germany, where he gradually started to write again. There he wrote these very personal pieces for piano that are like a diary. Reminiscent ofthe composers he adored in his childhood, his “dreams” are shown in the shapes of Chopin, Schumann and Brahms. The chromatic harmony is expanded to the utmost in peaceful No.3. In passionate No.5 harmony wanders around with melodies in irregular rhythm. The extremely slow No.7 is dark and full of agony and in humorous No.10 (Humoreske) you can feel his typical sarcasm in the extreme change of dynamics. No.12 sees the left hand play the same figure throughout the whole piece lead by an ostinato, while the right hand plays scales and cascades as if improvised.

Franz Liszt (1811–1886) was one of the pioneers of the New German School. Instead of continuing the classical form of the symphony, he pursued orchestral works by developing symphonic poems.

The Greek mythology of Prometheus has inspired many composers, including Beethoven, Schubert, Wolf, Scriabin, Fauré and Orff. The figure of Prometheus was often used as a symbol of heroism in music. When Prometheus steals fire and gives it to humans, it angers the supreme god Zeus so much that he punishes him by letting an eagle peck his liver, which re-grew every night ready for the eagle to feast again the following day.

Liszt composed this symphonic poem for the inauguration of the statue of the German poet and philosopher Herder who wrote the dramatic scenes “Der entfesselte Prometheus”. Liszt writes: “the Prometheus-myth is full of mysterious ideas, dark traditions and full of hope (…) and fires our imagination through congruities of the symbolism with our most persistent instincts, our harshest pains and most blissful intuitions.” Starting tumultuously in fiery tremolo, it depicts not only fire itself but all virtues of humanity. I can imagine the development of humans in the fugue which builds up to the glorious coda of hope.

The French composer Claude Debussy (1862–1918), was with his diverse musical styles much more than a pioneer of impressionism. For many years Debussy’s Études and Élégie were considered his last works for the piano. However, In November 2001 Les soirs illuminés par l’ardeur du charbon surfaced at an auction, revealing an extraordinary story. During the harsh wartime winter of 1916-17 Debussy’s musical coal merchant gavescarce supplies of coal to the Debussy household. As thanks he received the beautifully written manuscript of this piece. Debussy wrote this last work for piano in 1917, a year before he passed away. This poetic piece, with a title quoted from Baudelaire’s poem, has only 23 bars and begins with a reminiscence to the fourth Prelude in Book I, Les sons et les parfums tournent dans l’air du soir. Lead by a constant ostinato in the bass throughout the piece, you feel the warmth in the darkness of night.

Feux d’artifice, the last piece of his Preludes Book II, is also not unrelated to war. Fireworks have their origin in the cannon, which is a fire forged unnaturally by humans. This last piece from the Preludes shows the beauty and glamour of fireworks, with all kinds of colours from the piano, but it ends with a quote from La Marseillaise, the national anthem of France. This quote is hidden in the tremolo of the bass as though heard very far away in the dark, which shows Debussy’s sense of irony.

Alexander Scriabin (1871–1915) was a composer and pianist whose evolution was one of a kind. In his early years, his works are tonal and often compared to Chopin, but over time his music gets gradually more abstract, something linked to his development of exceptional and original harmony.

Colours and lightwere significant to him. He thought every tonality had its own colour, so much so that he invented a so-called colour piano to use in concert for the symphonic piece with piano called Prometheus, Op. 60, which shows each colour of harmony in coloured lights.

In his late years Scriabin was totally obsessed with theosophy. All his works are somehow related to his project “Mystery”. This project, which was never realised,was supposed to bring together all arts to a synesthesia and with that the end of the world, a “fire storm”, which leads people to release. The so-called “mystic chord”, which is a six-note scale which consists of C, F#, Bflat, E, A, D is a harmonic and melodic basis to his late works. His music in this period is abstract, suspenseful and ecstatic, the tonality is also unstable.

The mystic chord is also the basis to Vers la flamme, Op.72. It starts in soft, foggy chords, and as Scriabin describes, “gradually blossoms … from the fog to the blinding light”. A bright white light was what he desired for the climax. The apocalyptic, horrifying chords and tremolo stirs your imagination by showing you a way to another world by an explosion of ecstasy.

Manuel de Falla (1876–1946), born in Cadiz in Southern Spain, is one of the most important Spanish composers, who integrated the folklore of his country into his music. In 1907, he moved to Paris and lived there for 7 years, and during that time gained inspiration from the impressionists. There, he also made an acquaintance with Diaghilev (who is mentioned below in connection with Stravinsky), for whom he wrote his other ballet El sombrero de tres picos. When World War I began, he went back to Madrid and wrote El amor brujo in 1915, which was first a guitaneria (a gypsy piece with dances, songs and spoken words) and between 1919-1925 arranged it into a ballet, with songs for mezzo soprano. The style of music is based on “Cante jondo”, which means “deep song” in Andalusian Spanish, a style of flamenco with serious, moving character themes such as love, death and forgiveness. The piano version by the composer is recorded on this album. The story is about a woman who was married to a bad man whom sheloved nevertheless. Even when a new beau appears, she can’t forget her late husband whose spirit haunts her.

The Cancion del fuego fatuo is a song about love compared to will o’ the wisp, which goes as follows:

The melancholic folkloristic melody is accompanied by broken chords where you can imagine sounds of a guitar.

There was a time I waspassionate about Flamenco. The famous Spanish film director Carlos Saura’s Flamenco trilogy has inspired me very much to play these pieces.

Igor Stravinsky (1882–1971) had a profound friendship with Sergei Diaghilev, the legendary promoter and producer of the arts and founder of the Ballet Russes in Paris. Stravinsky supported Diaghilev’s idea to bring music, painting and dance together.

After hearing two of Stravinsky’s orchestral works, Scherzo fantastique and
Feu d’artifice, Diaghilev commissioned Stravinsky in 1909 to orchestrate some Chopin pieces for the ballet. In the spring of 1910, another commission followed, the music for L’Oiseau de feu (The Firebird) for the Russian Ballet season at Opéra de Paris. Still in his 20s, Stravinsky was very flattered by this commission. It was the beginning of a fruitful collaboration which brought such works as Petrushka andThe Rite of Spring.

In this music, you hear lots of references (especially harmonically) to the music of his mentor Rimsky-Korsakov, who had just passed away and to whom this work is dedicated.

The story of The Firebird is based on a Russian folktale about a prince who meets the firebird and with his help defeats the villain Kaschei, rescues the princesses and then marries one of them. This is a piano arrangement made by Stravinsky in 1910.

The selection of pieces are from the suite created in 1919. After the mysterious Introduction, the Dance of Firebird with its light playful figures and chromatic lines follows, then the elegant Khorovod of the Princesses with its delicate melody. In the Infernal Dance, where Kaschei’s subjects are sent into a mad dance through the magic of the firebird, the penetrating syncopation and ostinato lead this wild dance. A lyric middle part follows, before going back to the dance which gradually develops to a ferocious climax. After the Lullaby with its calm melody (originally played by bassoon), the pianissimo tremolo at the beginning of the last piece, The Disappearance of Kaschei’s Palace leads into the famous melody of Russian folk song (originally played by French horn).

Fire is an element which disappears eventually, but the Firebird (phoenix) is a creature which has eternal life. He jumps into the fire and rises again from the ashes the next morning. In the ending of The Firebird you are wrapped by glittering sounds of harmony as if a burning red sun rises. In this incredible harmony, I feel hope in the fire of life circling eternally. 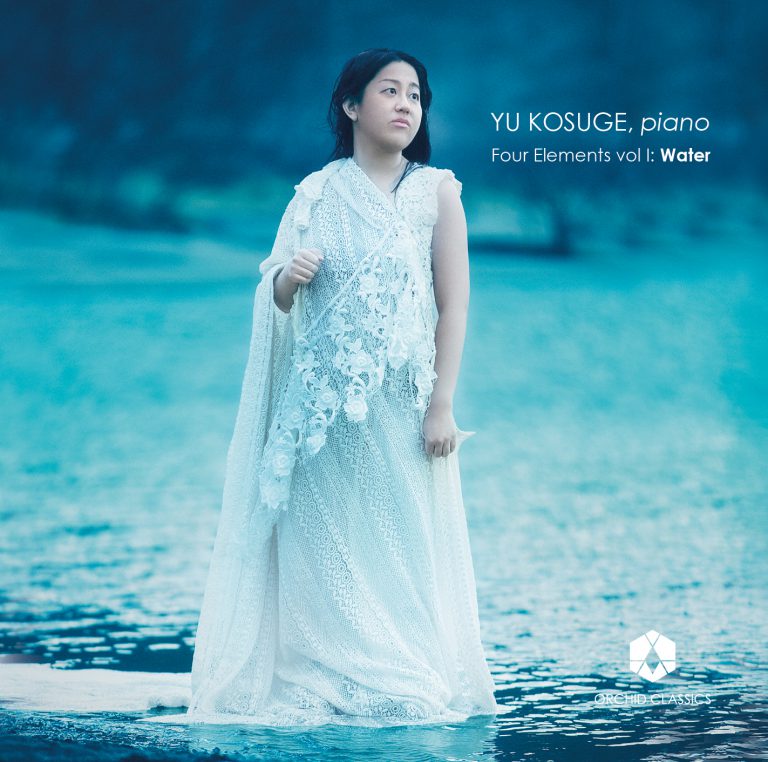 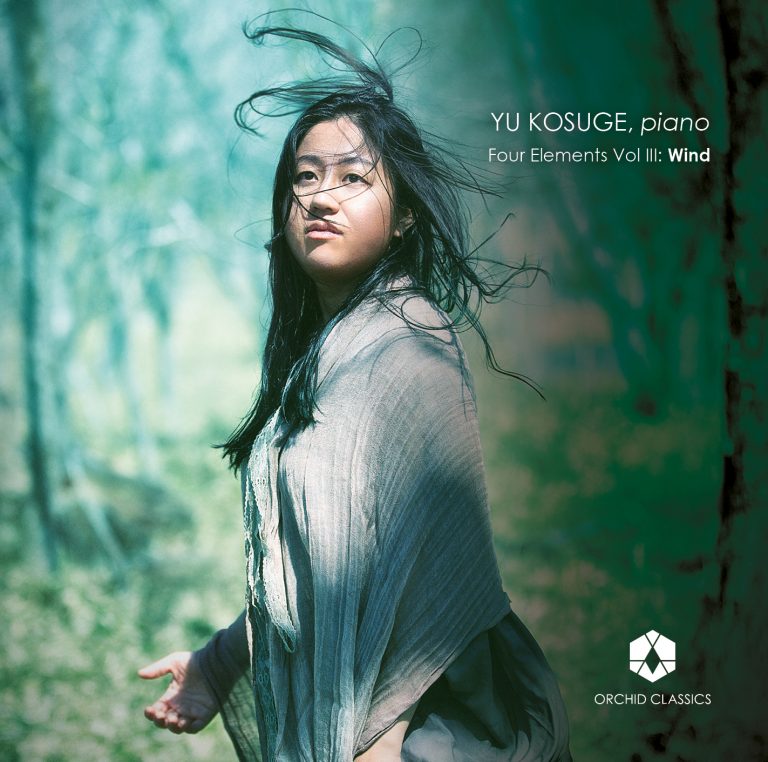 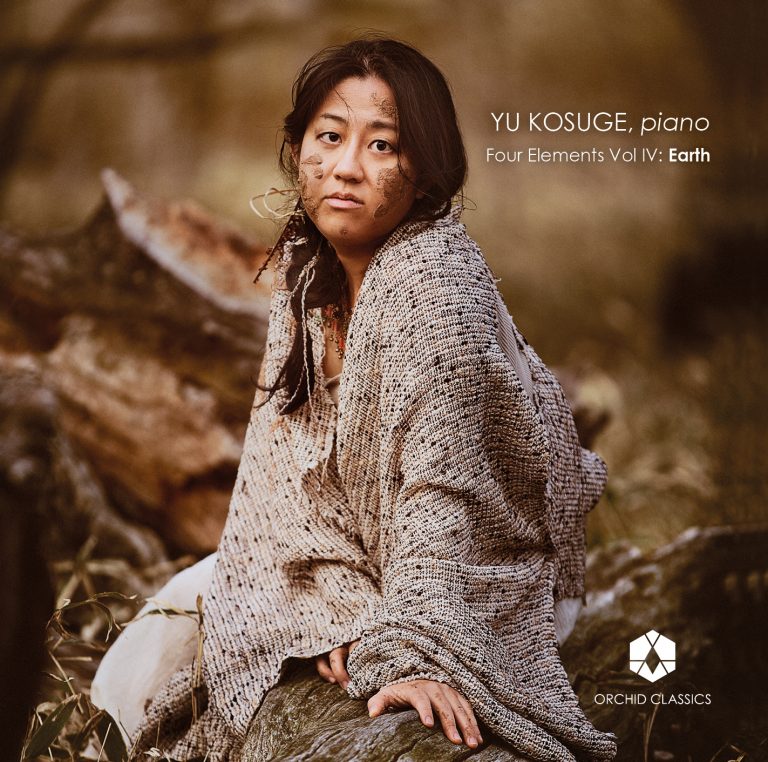