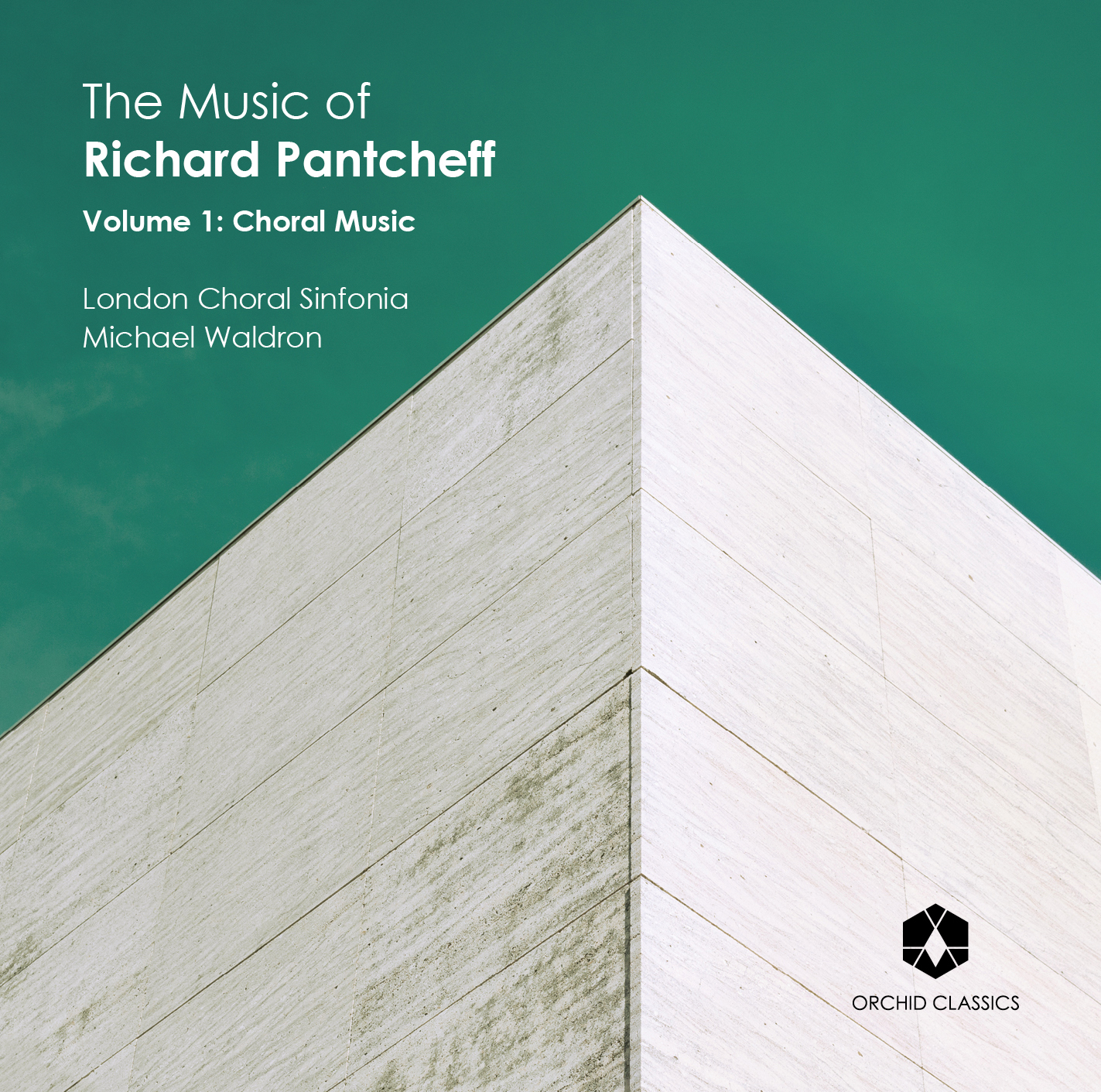 The Music of Richard Pantcheff

THE MUSIC OF RICHARD PANTCHEFF: VOLUME 1

Richard and I first crossed paths in London in early 2013. In the coming months we exchanged emails and scores, and I was immediately struck by his music. It was still relatively early days for the London Choral Sinfonia, but plans were afoot for a recording of Christmas music, and I was keen to include one of Richard’s pieces. A Christmas Carol seemed like a perfect addition to the album. It had not been recorded before, but from fumbling through the score at the piano I could sense it was a piece of great depth.
I am always captivated by music that has the ability to transport a listener in a relatively short period of time: A Christmas Carol is one such piece, and has remained close to my heart ever since. Within another 12 months Richard and I were in discussion about an album showcasing his music.
A single-composer album requires particularly thoughtful programming. I was very keen to showcase Richard’s broad appeal: the intensity of the words and music in Four Poems of Stephen Crane is quite different in character – yet complement brilliantly – the more overtly melodic, stand-alone pieces of Spirit of Mercy and Veni Sancte Spiritus. The intimacy of Turn again then unto thy rest alongside the enormous breadth of the St. Paul’s Service demonstrate Richard’s great ability to portray scale. The virtuosic and charged setting of the secular King Henry VIII’s Apologia will challenge the most experienced choral singer, but numerous other pieces on the recording are far less demanding and would suit almost any choir in a secular or sacred context.Richard himself discusses the influence of the rich heritage of English choral music, from which his compositional voice is clearly descended. This being said, it is by no means pastiche: I find it original, inspired and at all times profound.
There is music on the album to suit all tastes, and I hope people hearing the anthology on this album will develop the same love for it as I have.

Richard Pantcheff is internationally renowned as one of the finest contemporary British composers of Choral, Organ, Chamber and Instrumental music. He was trained in choral music and composition from an early age, starting at Ripon Cathedral, and thereafter reading music at Christ Church, Oxford, under Simon Preston and Francis Grier. He was mentored in composition by Benjamin Britten in the last years of Britten’s life. Since then he has been commissioned to write new works for the leading performers in their field.
From 2012-2019 he was Director of Music at St. George’s Anglican Church, Johannesburg, South Africa, where he remains as Composer in Residence. He is a Patron of the London Festival of Contemporary Church Music, and Founder-Director of the Akorina Consort, a new choir comprising young professional singers in London.
All of his music has been published, and features regularly in major international music festivals, as well as in concerts, recitals, and church services worldwide. There are currently eleven commercially-released recordings in the catalogue featuring his music.
His compositions are performed and broadcast all over the world, and have received wide acclaim from performers, critics, and audiences for their originality, technical brilliance, and emotional power.

More information can be found on his website: www.richardpantcheff.com.

The London Choral Sinfonia was formed for a concert in the chapel of Trinity College, Cambridge, in 2008. Since then the LCS has secured a reputation as one of the highest-regarded and critically-acclaimed chamber choir and orchestral ensembles, performing a broad repertoire throughout the season. A busy performance schedule involved regular appearances at venues including Cadogan Hall, St. Paul’s Cathedral, Kings Place and St. John’s Smith Square.
Aside from championing many of the major cornerstones of the repertoire, the LCS seeks to champion new music, having premiered new works and recordings with numerous composers including Tarik O’Regan, Owain Park, Richard Pantcheff and Ian Assersohn. Recent premieres include former Composer-in-Residence Oliver Rudland’s Christmas Truce, with a libretto by Poet Laureate Carol Ann Duffy. The group’s realisation of Francis Grier’s epic Sword in the Soul was premiered in 2010 and featured poet Sir Geoffrey Hill and librettist Alice Goodman.
Performance highlights include Bach Jauchzet Gott with Katherine Watson (soprano) and Crispian Steele-Perkins (trumpet), Bach Motets and Cello Suites with Guy Johnston (cello), Mozart Requiem with Duncan Rock (bass), Britten St. Nicolas with Nick Pritchard (tenor), and Brahms Ein Deutsches Requiem with Matthew Brook (baritone).

Michael Waldron began his musical training as a chorister at St Ambrose College, Hale Barns. After a gap year Organ Scholarship at Worcester Cathedral, he held the Organ Scholarship at Trinity College, Cambridge, for four years. Here he studied under Stephen Layton, during which time he was involved with the Choir’s numerous international tours, concerts, broadcasts and recordings.
Since graduating, Michael has quickly established himself as one of the most dynamic and versatile conductors of his generation, enjoying a busy concert career. He has worked with the Philharmonia Orchestra, Hamburg Symphony Orchestra, Royal Philharmonic Orchestra, Britten Sinfonia, Academy of Ancient Music, Orchestra of the Age of Enlightenment, Polyphony, London Mozart Players and Tonbridge Philharmonic, including appearances at the Royal Albert Hall, Royal Festival Hall, Queen Elizabeth Hall, Cadogan Hall, Wigmore Hall and BBC Proms.
Michael enjoys an extensive operatic career, including shows and projects for the Royal Opera House, English National Opera, Buxton International Festival, Opera Della Luna, Wilton’s Music Hall, and West Green Opera.
He is currently Artistic Director of the London Choral Sinfonia, London Lyric Opera, Islington Choral Society, Epworth Choir, and has also held posts with Guildford Choral Society and University of West London Chamber Choir.

Jeremy Cole is Director of Music at Wells Cathedral, a position he took up in January 2020, having previously been Acting Organist and Master of the Choristers, and Assistant Organist since 2017. He was organ scholar at Trinity College from 2010-2013, where he studied the organ with Colin Walsh, Stephen Farr, and David Briggs, and conducting with Stephen Layton. He was closely involved in the world-famous choir’s routine of services and concerts, and features on several of their recordings on the Hyperion label.
Jeremy has held positions at St. Paul’s Knightsbridge and St. Martin-in-the-Fields in Trafalgar Square, where he was the principal organist, playing for all regular and special services, as well as concerts and special events, in one of London’s busiest churches and concert venues. He combined this role with a busy freelance career as an organist, conductor and piano accompanist. While in London he was assistant conductor and accompanist of the Holst Singers, and worked regularly with leading choirs such as Polyphony and the City of London Choir. He is in demand as a repetiteur for solo singers and instrumentalists and as a continuo player.
In his role at Wells Cathedral, Jeremy is responsible for the Cathedral Choir’s busy schedule of nine sung services each week, as well as its broadcasts, concerts and tours. He is also a visiting organ teacher at Wells Cathedral School, and Musical Director of the Wells Cathedral Oratorio Society, through which he works with many of the country’s finest orchestras and soloists.

Matthew has a varied career as an accompanist, repetiteur and chamber musician. He has collaborated with leading artists, including Danielle De Niese, Dame Kiri te Kanawa, Sir Thomas Allen, Brindley Sherratt, Sally Matthews and the Kokoro Ensemble. His performances have been broadcast live on BBC, Sky Arts and Classic FM, and have taken him to major UK venues and festivals, including Wigmore Hall, Snape Maltings, Oxford Lieder, Cheltenham Festival and the BBC Proms. Matthew has performed as a pianist and harpsichordist with the LPO, RPO and OAE and his competition successes include the accompanist prizes at ‘Das Lied’ 2019 and the 2014 Kathleen Ferrier Awards. He is on the music staff at Glyndebourne, and has worked on a huge variety of repertoire, from Handel and Mozart to Strauss, Janáček and several world premieres. Matthew read music at Gonville and Caius College, Cambridge, where he was organ scholar. He then studied with Michael Dussek and Pascal Nemirovsky at the Royal Academy of Music, where he now teaches. In 2016 he was made an Associate of the Royal Academy of Music.