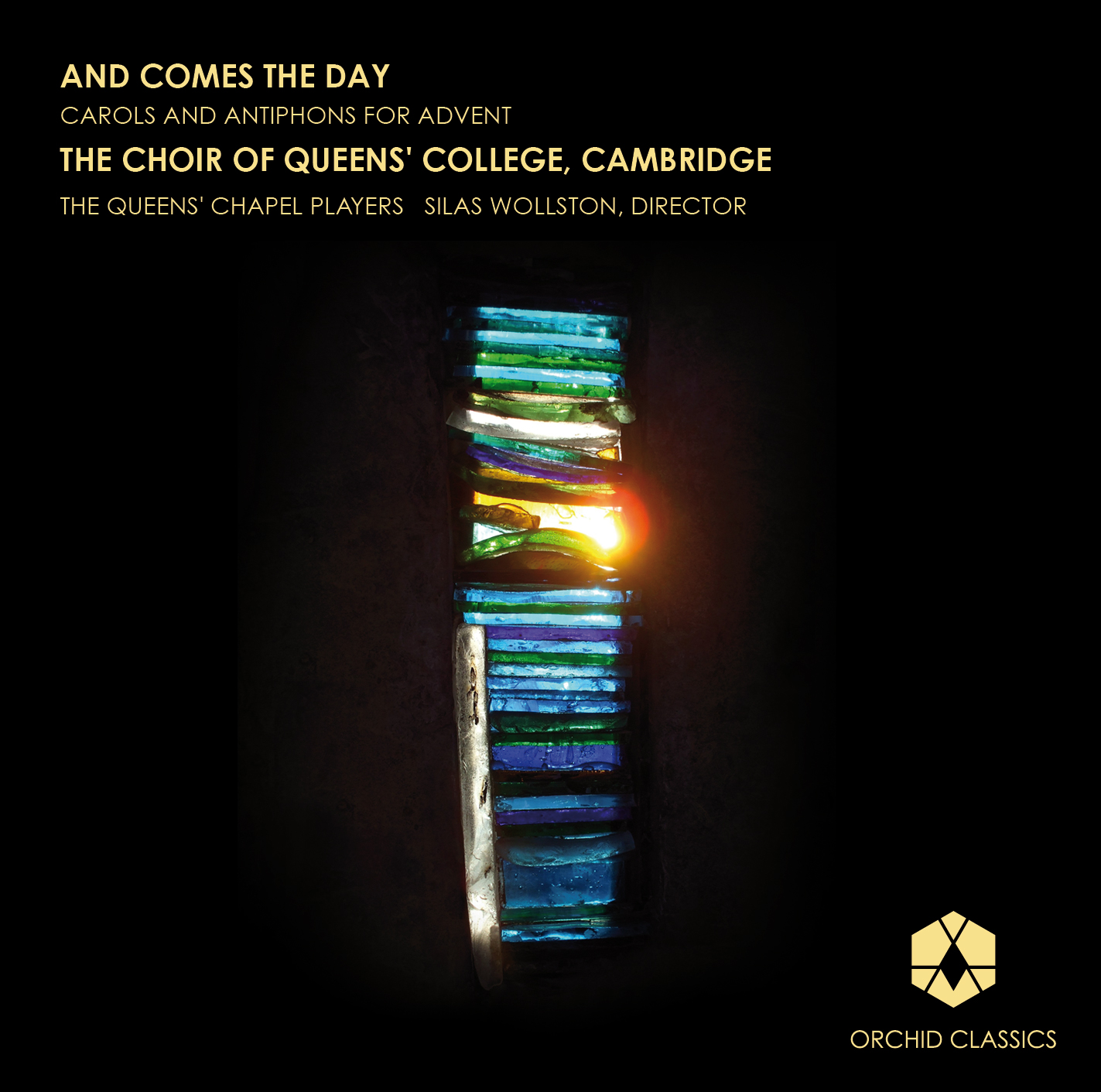 And Comes the Day

AND COMES THE DAY
Carols and Antiphons for Advent

Advent Prose: Drop down ye heavens from above
Plainsong

AND COMES THE DAY

The music on this recording explores Advent themes through the words of medieval English poets, and through the Latin texts of antiphons that have their origins in the Early Church. The majority of the English carols focus on the mystery of the incarnation and the role and experience of Mary, who is referred to symbolically as a rose. The seven Advent Antiphons explore attributes of Christ as the Messiah, each referring to a prophecy from the book of Isaiah. They were traditionally sung before and after the Magnificat on the seven days preceding Christmas Eve and were in regular liturgical use by the eighth century. They are most familiar to us today as the hymn “Veni, veni, Emanuel” (“O come, O come, Emmanuel”), which is a 13th-century lyrical paraphrase of these antiphon texts. The order of the antiphons has a definite purpose: starting with the last title, “Emmanuel”, and working backwards, the first letters of each title form the acrostic “ERO CRAS”, the Latin for “Tomorrow I will be with you”.

The words of Drop down ye heavens from above, which are taken from the book of Isaiah (45:8), express the longings of the prophets, and symbolically of the Church, for the coming of the Messiah. Also known as “The Advent Prose”, a number of sources give a plainsong melody and use the text as an antiphon to a series of prayers, two of which are included in this recording.

Bob Chilcott’s double-choir setting of the Advent Antiphons was composed in 2004 for the Cathedral Choir in Reykjavik. The original plainsong melody occurs as a recurring motif throughout the piece and is sung by each singer independently in their own rhythm in O Oriens; this aleatoric technique is also used to create a halo of sound in O Radix Jesse.

The words and anonymous musical setting of There is no Rose are found in a roll of carols (now in the library of Trinity College, Cambridge) which dates from the early 15th century. The text mixes English and Latin – a common feature of medieval English poetry. John Joubert’s beautifully simple setting of the same text was composed in 1954. In this and in other carols with middle-English texts, spelling and pronunciation have been wholly or partially modernised.

Boris Ord was organist at King’s College, Cambridge, from 1929 to 1957. Adam lay ybounden is his only published piece and has traditionally been performed after the first lesson at the annual Festival of Nine Lessons and Carols from King’s College Chapel. The anonymous 15th-century text, relates the events of Genesis, Chapter 3; the “four thousand winters” refers to the belief in medieval theology that Adam remained “in bonds” with the other patriarchs from the time of his death until the crucifixion of Christ.

The Matin Responsory: I look from afar is sung on the first Sunday of Advent during the night office of matins. The arrangement that is familiar to the English-speaking world was published in 1970 in a volume edited by David Willcocks and John Rutter. The music is adapted from a Nunc Dimittis by Palestrina.

Marc-Antoine Charpentier’s settings of the advent antiphons were probably composed in the early 1690s when he was working for the Jesuits as maître de musique at the church of St Louis in Paris. O Clavis David is unusual within Charpentier’s setting in being scored for four-part choir with four-part string accompaniment: most of the setting requires just three solo voices and organ. Charpentier’s Noels pour les instruments, a set of instrumental arrangements of popular French Christmas songs may well have been intended for performance during services alongside the advent antiphons. The arrangement of Or nous dites, Marie is highly stylised, with alterations to the rhythm of the original melody to enable an imitative dialogue between the first violin and cello. In the setting of Joseph est bien marié the full sound of four-part strings alternates with a trio-sonata texture.

Britten composed A Hymn to the Virgin at the age of just seventeen and it was one of the first works by him to attract wide attention when it was published five years later in 1935. Britten assigns the Latin phrases of the text to a separate group of singers, performed in this recording by a quartet of soloists. William Walton’s setting of the 16th-century text All this time was composed in 1970. It is simple and direct: a lively refrain is interspersed with verses sung in unison.

The Estonian composer Arvo Pärt wrote his setting of the advent antiphons in 1988. Under the title 7 Magnificat Antiphonen, it was composed for the RIAS Chamber Choir in Berlin, where Pärt was living at the time. The shimmering harmonies of O Morgenstern result from the interaction of two tonalities: sopranos and tenors sing only the notes of an E-major chord, while altos and basses outline notes of a G major scale (with flat seventh). This piece serves as the antiphon to a setting of the Magnificat by Hieronymous Praetorius, who was organist at the St. Jacobikirche in Hamburg from 1586 until his death in 1629. Originally published in 1599, it was printed again in 1622 with the addition of two Christmas carol arrangements, including In dulci jubilo.

Herbert Howells’s ever-popular setting of the 14th-century carol, A Spotless Rose, was one of his first significant works for choir. It was composed in 1919 when Howells was working as an assistant to R.R. Terry on editions of Latin Tudor repertoire for the choir of Westminster Cathedral.

The text of the Advent hymn Veni, veni, Emanuel is a metrical version of the Advent Antiphons. While this text is thought to date from the 12th century, the melody appears to stem from a 15th-century French processional hymn for Franciscan nuns, although it may also have 8th-century Gregorian origins.

“Veni, veni, Emanuel” forms the final part of this musical advent calendar. The music that follows represents a nativity scene. In I saw a sweet and seemly sight the focus is on Mary: as she lulls her child to sleep, her joy is mixed with “mourning”, the anonymous 15th-century text here presumably expressing a premonition of Christ’s suffering. The musical setting was composed for Queens’ College Choir especially for this recording. In Bruce Blunt’s poem Bethlehem Down the focus is on Christ as King and on the symbolism of the gifts of the three kings. This carol, with music by Peter Warlock, won the Daily Telegraph annual Christmas carol contest in 1927. And finally, in Warlock’s Benedicamus Domino, with words from the 15th-century Sloane Manuscript, the focus can perhaps be on the joy and wonder of the shepherds: the prophecies have been fulfilled and the day has come.

The Choir of Queens’ College is one of the leading mixed-voice choirs in Cambridge. It consists of around 24 singers, the majority of whom are undergraduate members of the college, and two organ scholars, all under the leadership of the Director of Music, Dr Silas Wollston. During the academic term, the choir sings at services three times a week in the college chapel, performing music from both Protestant and Catholic traditions. While twentieth-century music forms the core of the choir’s repertoire, the choir increasingly performs Baroque and contemporary music, reflecting the specialisms of the Director of Music. The choir is also regularly joined by a group of student instrumentalists, the Queens’ Chapel Players, enabling the liturgical performance of concerted music. Outside the academic term, the choir performs both nationally and internationally. In recent years the choir has travelled to Hong Kong, New York, France, Germany, Southern Italy and Belgium. The choir’s CD recordings, including Flight of Song, Songs of Heaven and Earth and Love and Honour, have attracted widespread critical acclaim.

The Queens’ Chapel Players was formed in 2011 by Silas Wollston to enable the performance of sacred music with instrumental accompaniment within a liturgical context. Lead by a local professional, its members are undergraduates and graduates of the university, many of whom also perform with the Collegium Musicum, the university’s baroque orchestra. The group adopts a historically-informed approach to performance, using instruments appropriate to the repertoire.

Silas Wollston is a versatile musician who has pursued a varied career as a researcher, performer and composer. As principal continuo player and assistant conductor for Sir John Eliot Gardiner since 1999 he has become closely associated with the Monteverdi Choir and the English Baroque Soloists, with whom he has appeared as soloist on numerous occasions, including the celebrated Bach Cantata Pilgrimage in 2000. From 1996 to 2004 he was the artistic director of the award-winning chamber ensemble The Private Music, which championed unusual seventeenth-century English repertoire: this became the subject of his PhD thesis (The Open University, 2010). In 2011 he was appointed Director of Music and Director of Studies in Music at Queens’ College, Cambridge. As a composer, his works have been performed and recorded by Fretwork.