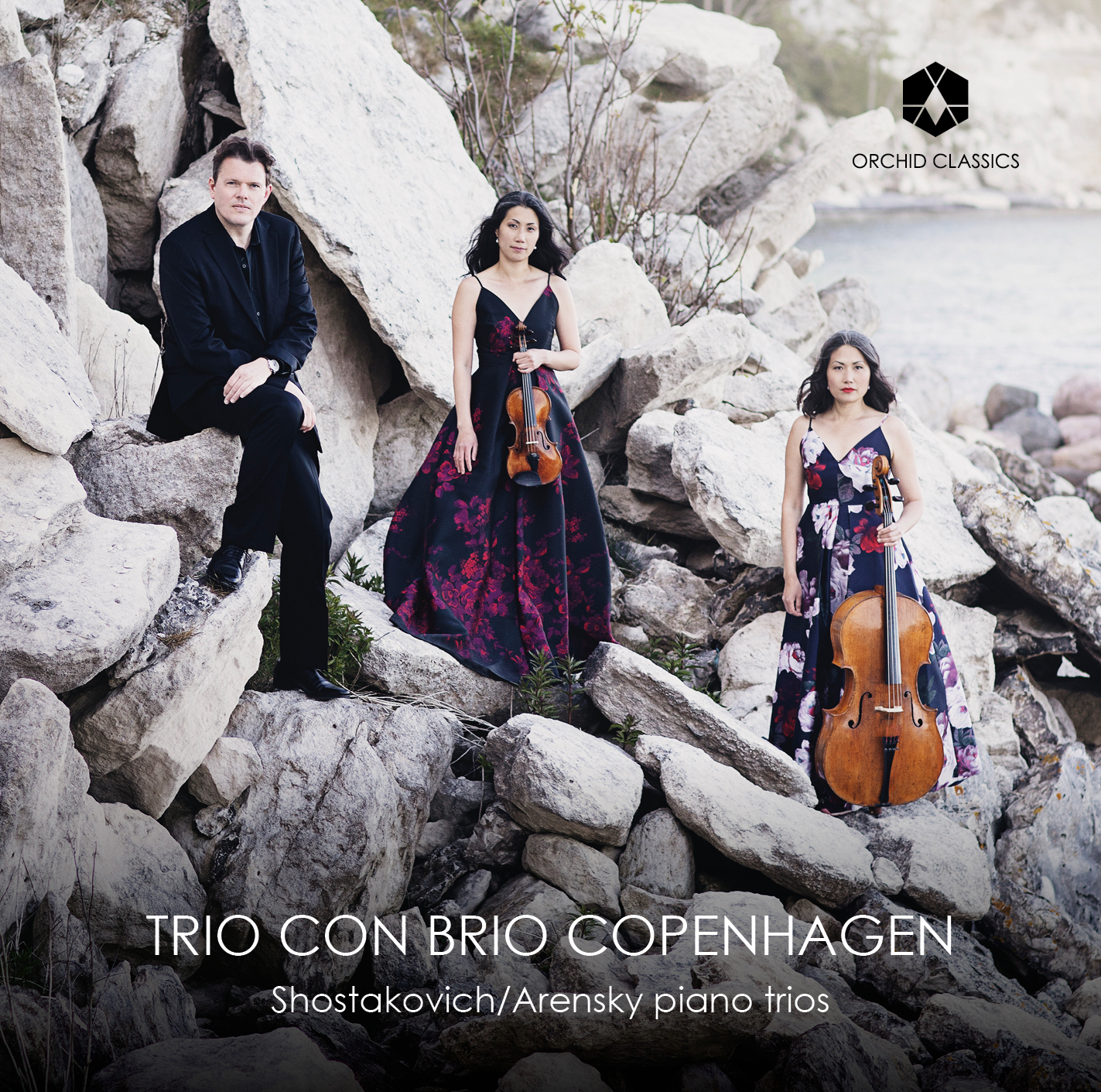 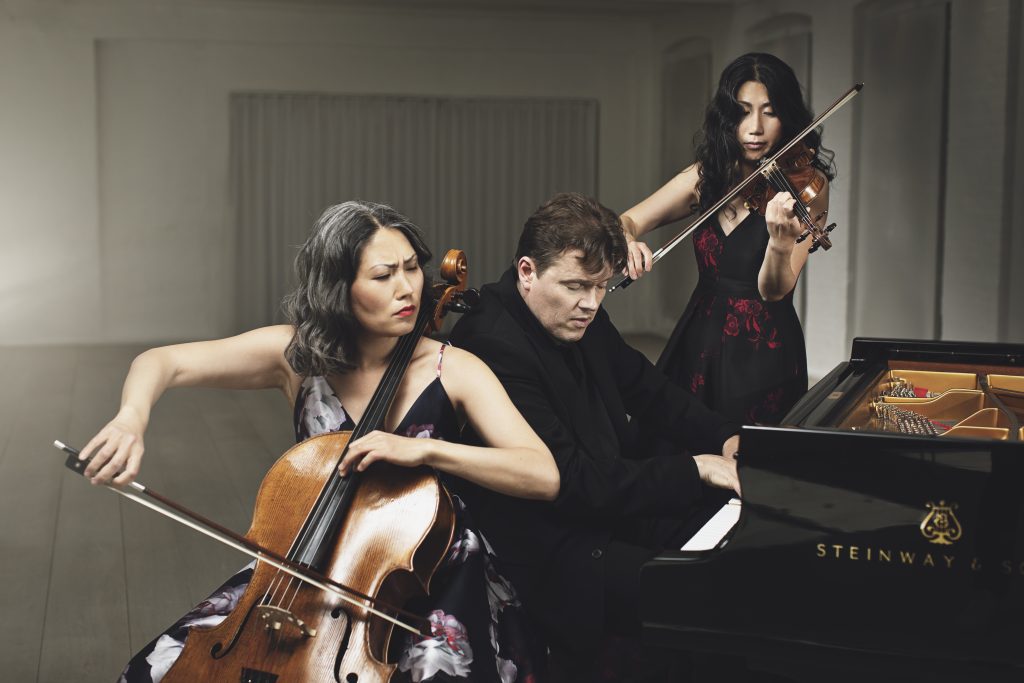 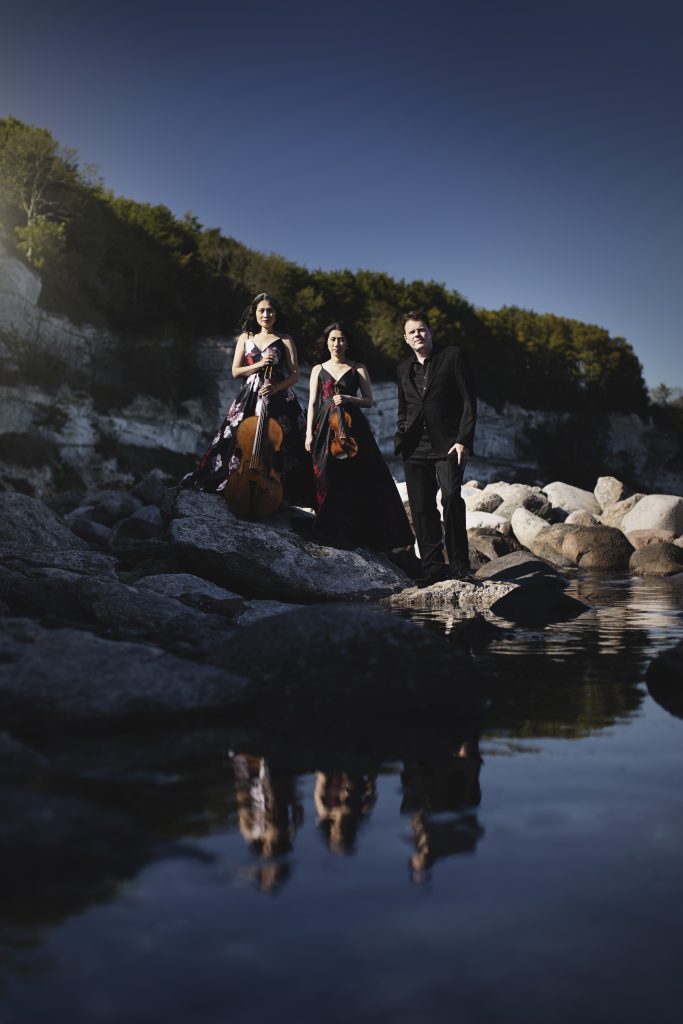 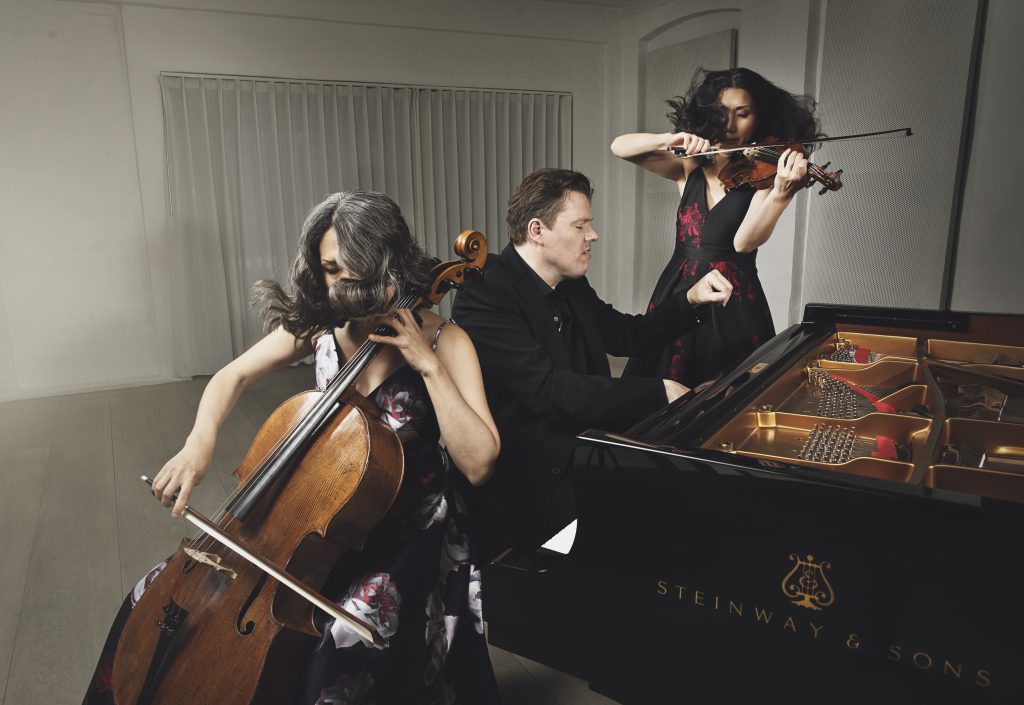 Music before and after a revolution

Despite the fact that Anton Arensky lived in the Tsarist period prior to the Russian revolution, and Dmitri Shostakovich in the communist Soviet Union which succeeded it, both are exponents of a vibrant Russian chamber music tradition, which displays a special love of singable melodies, pain and passion. We find this in its purest form in Arensky’s Piano Trio No.1 from 1894, when Romantic music – in the year after the death of Tchaikovsky – is at a peak in Russia.
In 1906, when Arensky dies and Shostakovich is born, the old world is beginning to crumble, and the hard-pressed Tsar loosens his dictatorial hold on the Russian people. But it is not until the revolution in 1917 that things seriously change. And when the 17-year-old Shostakovich writes his Piano Trio No.1 Poème in 1923 in Petrograd (St. Petersburg), he finds expression for strong personal emotions via a musical language that reminds one of the montage techniques which filmmakers of the time were experimenting with.
Just over twenty years later, in 1944, when Shostakovich writes his Piano Trio No.2, the age of experimentation is long since passed, and Shostakovich instead makes the music a medium for that which cannot and must not be expressed in words. By making use of Jewish music for the first time, Shostakovich succeeds in giving the greatest tragedies of the age a voice, while at the same time creating a music that displays an irrepressible spark of life.
Shostakovich’s Piano Trio No.1 originally had the title Poème and it was written to a young woman of the same age, Tatyana Glivenko, who Shostakovich falls in love with during a rest cure in the Crimea in summer 1923. His love is requited, and the couple continues to see each other for a great number of years, although Tatyana and Dmitri never married. Completely in accordance with the new ideals of the age, they are believers in free love, a form where one must not take the other person’s feelings as security. Nevertheless, Shostakovich is deeply hurt when Tatyana, six years later, marries another man.
The trio is in the fateful key of C minor, and, like Beethoven, Shostakovich presents a central musical theme from the very beginning, in the form of an agonised descending motif, played with great intensity on the cello. In this love music, love always means an aching heart, and everything is up for discussion. A short while after this, the music radically changes, and the melodious mood is replaced by teasingly jerky, disconnected music. As in the contemporary agitprop art which the young Soviet regime used to spread ideological messages, where the emphasis is on power of effect.
But Shostakovich’s intention is a different one. And when the music finally changes into a major key, with wonderful chiming sounds on the piano and a light, upward-striving theme, a world of feeling that is Russian through and through as well as the volatile sensitivity of a young mind are opened up. Precisely this theme is flung out by both violin and cello with immense expressiveness towards the end of the trio, where we are dealing with an invocation of the newly won love.
This, however, does not alter the picture of stormy music, characterised by sudden shifts and cuts, in which the sarcastic – later to become a central signature for Shostakovich – plays an important role.
And he is well aware of this himself. In a letter to his mother, Shostakovich refers to his teacher Maximilian Steinberg’s frustrated comment, “What sort of an obsession with the grotesque is this?”. This sort of music was not at all comme il faut at the conservative conservatoire in Petrograd, so Shostakovich applies to become a student at the conservatoire in Moscow, where Tatyana is living. After a performance there of Piano Trio No.1 he is warmly welcomed to the composition class there. Times change!

These Russian composers lived through turning points in their country’s history. Arensky died in 1906, the year in which Shostakovich was born, and their output charts the trajectory of Russian and Soviet political and artistic history during those years. Arensky’s ardent Piano Trio No. 1 was written in 1894, when Russian Romanticism was at its peak. Inspired by young love, the 17-year-old Shostakovich wrote his Piano Trio No. 1 Poème in 1923 in Petrograd (St. Petersburg), finding expression for strong personal emotions via a musical language influenced by film scores. Just over 20 years later, in 1944, Shostakovich wrote his Piano Trio No. 2. By making use of Jewish music for the first time, he gave the greatest tragedies of the age a voice, while at the same time creating a music that displays an irrepressible spark of life.

Like so many musicians, Trio con Brio Copenhagen have had to overcome the obstacles caused by the pandemic to make this recording happen. It had been scheduled for the spring of 2020 but was postponed for several months, by which time this repertoire had taken on a new significance. The members of the Trio have described the sense of relief they felt at performing together again, saying that “it felt so right and relevant to record exactly this repertoire”, the music’s anguished tone offering much-needed catharsis.

It was not just the pandemic that made them wait, however. When it came to Shostakovich’s Piano Trio No. 2, the Trio con Brio Copenhagen had already made the conscious decision not to rush into recording a work that, they feel, demands life experience for a truly mature interpretation. The Second Piano Trio “has been one of the key works in our repertoire since the very beginning of our Trio career”, but is “a very personal statement from Shostakovich and we have been waiting many years until we felt ready to make a recording that we feel respects the depths and many layers of this music. As a young player you feel already the greatness of this music but only time can make you experience the palette of human emotions hidden here.”

In addition to their own richly nuanced sense of this repertoire, the Trio has the benefit of special insights into Shostakovich’s music. “One of our teachers knew Shostakovich personally … these personal encounters gave us a direct insight” into his world and his music. The Trio’s approach to this repertoire is in contrast with their celebrated Beethoven cycle, employing a rough, even barbaric quality of sound to bring out the theatrical elements of these pieces.

Arensky’s Piano Trio No. 1 is, for the Trio con Brio, played “far too seldom.” They “have a strong affinity with this particular Trio” with its evocative “melodic and operatic qualities”. As for the two Shostakovich works on the album, the Trio observes that the composer’s distinctive traits are already audible in the Piano Trio No. 1, with its “Shostakovich trademarks such as sarcasm, sudden outbursts and extremes”. Yet these qualities are even more dramatically evident in the Piano Trio No. 2, which for the Trio con Brio is “somehow similar to a confession, a bitter description of a society and war without too much hope… listening to these compositions hopefully can makes us reflect and appreciate what we have.”

“… both explosive and exquisitely intimate” – The Strad

“… an excellent performance all round, showcasing an airtight ensemble, but also these Danish-based musicians’ flair for coloristic detail.” – Gramophone

”Trio con brio de copenhague: formation d’élite… We can now see the Con Brio as the worthy successors of the legendary Beaux-Arts Trio. That says it all!”
Diapason

Acknowledged as one of the finest piano trios in the world, the Trio con Brio Copenhagen is about to enter their 23rd season. Founded at the University of Music and Performing Arts in Vienna in 1999, the Trio is now based in Copenhagen and tours extensively worldwide.
The Trio was born out of an idea of the coming together of ‘musical pairs’ – of the two Korean-born sisters, Soo-Kyung Hong (cello) and Soo-Jin Hong (violin), with Soo-Kyung and her husband, Danish pianist Jens Elvekjaer. They quickly gained a reputation for their fresh and contemporary approach to the core repertoire. “Works by Beethoven, Schubert and Brahms are transformed in their hands into the alive-and-kicking music of today” said Danish Broadcasting’s Esben Tange. Winning almost all of the major competitions for piano trio – including the ARD (Munich), Vittorio Gui (Florence), Trondheim Competition (Norway), Kalichstein-Laredo-Robinson (USA), Allianz Prize (Germany) and receiving the prestigious “P2 Artists Prize” and “Carl Nielsen and Anne Marie Carl-Nielsen’s Honorary Award” (Denmark) – they are regularly heard at the world’s leading venues and concert series. Among these, Carnegie Hall, Lincoln Center, Wigmore Hall, Berlin Pierre Boulez-Saal, Concertgebouw, Elbphilharmonie Hamburg, Seoul Arts Centre, Théâtre de la Ville Paris and of course their beloved “home venues”, the Royal Library, DR Koncerthuset and the Tivoli Concert Hall, in Copenhagen.

Trio con Brio Copenhagen plays a central role in Scandinavia’s vibrant contemporary music scene. Leading composers have dedicated works to the Trio. They were enormously honoured that Per Nørgård dedicated to them a new piece celebrating his 80th birthday in 2012. In January 2016 the Trio presented the world premiere of Bent Sørensen’s Triple Concerto with the Danish National Symphony Orchestra, a work that won the prestigious Grawemeyer Award. Furthermore, they premiered Sven-David Sandström’s Triple Concerto, a work that marks his 70th birthday.
Reviews are fulsome. “One of the greatest performances of chamber music I’ve ever encountered,” praised American Record Guide. Gramophone wrote, “Superb…Any group would be hard-pressed to imitate this blend of verve and poise…”. Their Mendelssohn album was chosen by the UK’s Classic FM as the Best Chamber Music Disc of the year: “Every phrase soars and pulsates with the excitement of a fresh discovery as the Copenhagen players go the full distance with playing of skin-rippling sensitivity… sensational playing…”. Their Tchaikovsky and Smetana recording was hailed by The Guardian, “… Trio con Brio Copenhagen scale Tchaikovsky’s heights with the verve their name suggests …” The Trio’s most recent recordings of the complete Beethoven piano trios were received with the highest critical acclaim, with comments such as “… I was struck… by the feeling of improvisation; of three players moving forward together into a strange and wonderful new world…” (Gramophone).

The Trio are artistic directors of the Copenhagen Chamber Music Festival, the Chamber Music at Lundsgaard in Kerteminde and the Hellerup Chamber Music Society in Copenhagen. Soo-Jin plays an Andrea Guarneri violin, Soo-Kyung plays a Grancino cello, and Jens is Denmark’s first Steinway Artist. Both string players are endorsed by Jargar Strings and Thomastik-Infeld Vienna.
All three members of the trio knew right from the start that they would find their musical identities as a piano trio: “There is something about the configuration of a trio, about that triangle, that somehow focuses and amplifies the special understanding that we all have as people and as musicians. It is both a freedom and a fulfillment.”