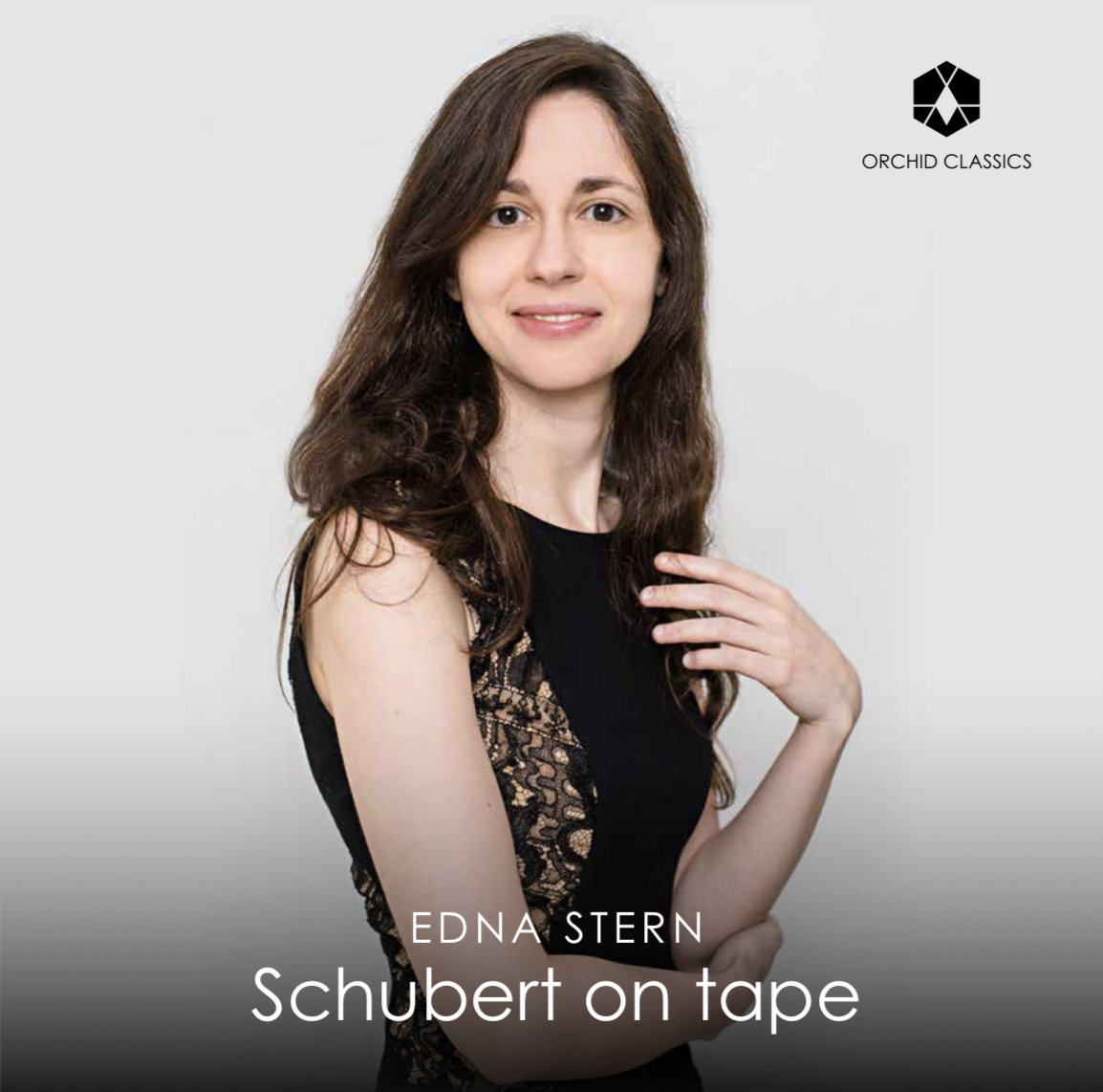 Pianist Edna Stern offers her interpretations of the music of Schubert via a refreshing and personal method of recording, using analogue tape to record single takes of each piece in order to present the most honest and immediate performance possible.

It is on a path that I have always imagined Schubert, the Wanderer, roaming the fields, a walking stick in hand and a light backpack on his shoulders containing the precious music paper he’d take out while resting under a tree, writing his melodies inspired by nature.
The force of nature is what strikes me most powerfully in Schubert, how nothing can stop the flow of his music, of the river, the lava pouring out of the volcano. He came from a modest family: his father was a schoolmaster, and he was torn between his teaching duties, the need to earn a living, and the wish to compose in freedom. Encouraged by his friend Franz von Schober, a wealthy law student, he finally abandoned teaching and devoted himself wholly to composition. Schubert’s reputation grew, but editors were reticent to publish his pieces. The two cycles presented in this recording, the Moments Musicaux D.780, and the Impromptus D.899, were apparently composed during 1827, with Schubert already gravely ill from the syphilis that would kill him in November 1828. It is said that he had arranged to be given counterpoint lessons from Simon Sechter on November 4, mere weeks before his death. In 1969 a batch of these exercises he then composed, addressed to Secther, were discovered in Vienna.
It is humbling to know that a genius like Schubert, who by then had already written the Impromptus, the Moments Musicaux and his last piano sonatas, (not to mention countless songs, symphonies, and quartets!) still felt the need to improve in a particular area—in counterpoint, and to make exercises.
These pieces reflect the turn music is about to take, the Classical era yielding to the Romantic. They reflect the rise of the middle class and of salon evenings that no longer belonged exclusively to the aristocracy, and that favoured miniature pieces over the longer piano sonata form.
These short pieces are based on mono-thematic material, inspired by the mono-thematic lied, which also announces the onset of Romanticism and revived interest in the forms and repertoire of the Baroque. Hence, Schubert’s interest and investment in counterpoint exercises.
The Baroque forms were illustrious in their development of mono-thematic material, in the way they showed such material’s evolution through modulations. For example, see the piece’s Theme, which acquires different colours in different tonalities, and its constantly changing nature through its interaction with the other voices.
Another significant aspect regarding the use of mono-thematic material lies in the minimalist connection between the different sections. The lied A B A structure that is mostly used here is a form in which a Theme (A) is presented, followed by a middle section (B), and finally, closing the piece, the return of the Theme. The connection between A and B is deeper than what it would seem to be on the surface. The middle sections are often a derivation or a variation on a part of the original A, and inside his B sections Schubert continually probes how far he can bend the original material and transform it.
Unlike most of this recording’s pieces, which are based on the lied form, the Impromptu No. 1 conveys the evolution of its Theme in one long variation movement. The Theme, sometimes played in a single voice and sometimes in harmonic chords, is subject to continual change throughout the piece, manifesting itself sometimes in Major mode, graced with light, happy triplets, and sometimes in Minor mode, accompanied by obsessive and ominous repeating notes. The Theme is always in flux, reminding us of Heraclitus’s famous dictum:
“You cannot step into the same river twice, for other waters are continually flowing on.”

Pianist Edna Stern offers her interpretations of the music of Schubert via a refreshing and personal method of recording, using analogue tape to record single takes of each piece in order to present the most honest and immediate performance possible.

Many recordings place the focus on the choice of instrument, but Edna Stern recognises that the recording process itself plays a huge role in the end result, adding layers of resonance or splicing together ‘perfect’ passages. As she argues, “today’s massive use of editing – or perhaps I should say overuse, in which every little mistake or imperfection is corrected, and ‘magic moments’ are strung together one after another – has done more to hinder music than to serve it.”

This ethos grew out of early recording experiences: “I was shocked to encounter an interpretation that I myself could never have played or even imagined … constructed from bits and pieces assembled by the sound engineer according to his own logic, built from what he deemed the ‘best’ excerpts from my recording session. For me though, the resulting recording made absolutely no sense.” It was this that prompted Edna Stern “to go back to a mode of recording practice that would more faithfully do justice to the music and Schubert’s humane masterpieces in particular.” The masterpieces heard on this album are Schubert’s Four Impromptus and Six Moments Musicaux, works that lend themselves to, or even demand, performances of truthfulness and spontaneity. As Stern says: “The force of nature is what strikes me most powerfully in Schubert, how nothing can stop the flow of his music, of the river, the lava pouring out of the volcano.” It follows, then, that staunching this flow with editing goes against the very nature of Schubert’s music.

Edna Stern grew up listening to her favourite artists on tape – Yves Nat, Wilhelm Kempff, Wilhelm Backhaus, György Cziffra – so it seemed natural to look to this medium in order to achieve a similar quality in her own album. This recording is made directly to tape, without any editing, with the result that we hear Stern’s Schubert unvarnished, in all its humanity and warmth. As she puts it: “There is a sense of freedom – even of danger – with the human and all their flaws. There is a coherent continuation of movement. Moreover, there is a sense of life.”

Edna Stern began her studies in Israel with Viktor Derevianko, a student of Heinrich Neuhaus. She continued studying with Krystian Zimerman at the Basel Hochschule and with Leon Fleisher at the Peabody Institute and at the Lake Como International Piano Foundation. Her repertoire ranges from Bach to Berio. Her recordings are highly praised by critics, receiving such awards as Diapason d’Or, Diapason Découverte, Arte Best CD, Gramophone upcoming artist, and Sélection Le Monde. Her last recording, released by Orchid Classics and dedicated to Hélène de Montgeroult received a Critic’s Choice of the Year 2017 of the Gramophone Magazine and Choice of France Musique, the French radio.
Edna Stern has performed at prestigious halls and festivals such as the Philharmonie of Paris, Concertgebouw of Amsterdam, Munich’s Hekulessaal, Paris’ Châtelet Theater, Moscow’s Music-House, Petronas in Kuala Lumpur and Musashino hall in Tokyo; performing in solo recitals and with orchestras, with conductors such as Claus Peter Flor and Andris Nelsons. Stern gives masterclasses all over the world, in such places as the CNSM of Paris, Rutgers University, and Tel-Aviv Zubin Mehta School of Music.
She has been a professor at the Royal College of London since 2009 and her musical activities include working with great artists in other art fields, like film director Amos Gitaï, as well as Etoile/Leading principal dancer from the Paris National Opera Ballet, Agnès Letestu.