Legends is a fascinating and unique programme in which family ties and teaching lineages overlap in a mosaic of musicians, showcasing neglected repertoire and figures in the process.

The album features a beautiful performance of Wieniawski’s Legend by Kirill Troussov, Seven Songs by Ensecu sung by Rachel Harnisch, and a wonderful Tango by Irène Wieniawska, performed by the project’s creator Gwendolyn Masin. 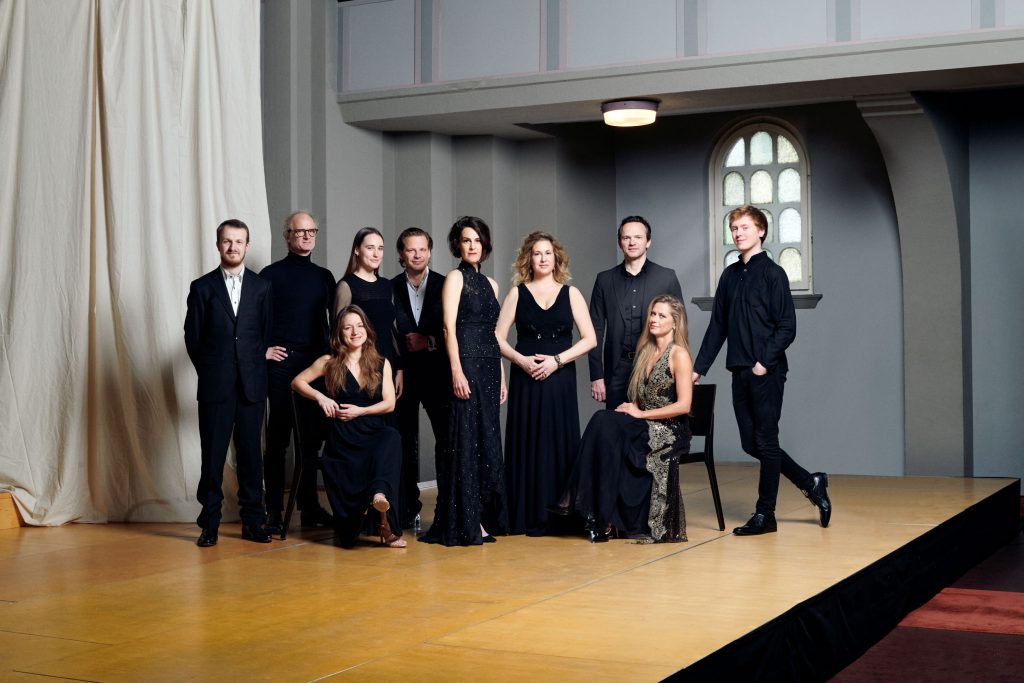 Brussels. I had come to visit libraries, the conservatoire and the Ysaÿe foundation. I was tracing a narrative that had its origins here. This thread started with one of the Conservatoire Royal de Musique de Bruxelles’ earliest representatives, Henryk Wieniawski and was followed by his student Ysaÿe, and Ysaÿe’s student, Enescu. At the Conservatoire, Wieniawski had stepped into a distinguished lineage within the Belgian School – previous holders of the post had been the school’s founder, Charles-Auguste de Bériot, then Vieuxtemps and thereafter Wieniawski. As I followed the trail of violinist after violinist, I suddenly discovered a name in the lineage that was not connected directly to the Conservatoire – that of a certain “Poldowski”. Poldowski was the professional pseudonym of Belgian-born Irène Régine Wieniawski, daughter of Polish-born Henryk. Irène was a composer whose music is instantly recognisable and carries the sculpted edge of ironic humour of someone observing and questioning how things unfold. Tellingly, she chose a family name’s masculine ending rather than a feminine one, as if to emphasise her point. The path that I was on also shed light on Józef – Henryk’s brother – whose stellar career faded away after his passing rather than being completely eclipsed by that of his sibling.
A pandemic was silently raging outside, leaving the music department of the Royal Library of Belgium eerily silent. I read the cover of a manuscript embellished with cursive handwriting and opened it to the first page. My inner ear heard three notes rise in succession, gaining amplification through repetition – the opening bars of a work by Ysaÿe, who was trying his hand at something new: a string quintet. I leafed through the autography, aware that I was at once a curious musician reading the personal musical thoughts of an icon and at the same time something of a sleuth.
There are those in the field of music who suggest there is a reason why a work is not frequently played or recorded. The ellipses in their voice as they lilt the end of the sentence hint at the idea that it is so because it is not worthy of recognition. It is deemed not good enough.
I see an unfortunate relationship with this way of thinking and the neglect that works of female composers have suffered – works unknown, not worthy of recognition, not good enough. In the words of Nadia Boulanger, “an artist and their music can never be more or less than they are as a human being”. The composers featured on this recording were exceptional – their compositions equally so.

Following the success of her Orchid albums Flame and West Side Story, violinist Gwendolyn Masin returns with Legends, a fascinating and unique programme in which family ties and teaching lineages overlap in a mosaic of musicians, showcasing neglected repertoire and figures in the process. Throughout, the implications of the word ‘legend’ are felt. Iconic figures and works rub shoulders with those who unjustly remain in an almost mythical realm: Irene Wienawska (aka Poldowksi), her father Henryk Wieniawski and uncle Józef Wieniawski, Henryk’s student Ysaÿe, and Ysaÿe’s student Enescu.

This recording of Ysaÿe’s single-movement String Quintet in B minor is especially remarkable as it is relatively new on the recording scene; it received its Swiss premiere in May 2022 as part of Masin’s GAIA Music Festival, and this particular version has never been recorded before.

GAIA Music Festival – the brainchild of Gwendolyn Masin – is a place where artists and their audience gather annually since 2006 to celebrate music, with chamber music at its core.
The idea of a family-themed festival honouring the women and men that have supported one another as they create compositions that withstand the ages culminated in the 2022 edition of the festival when the programme recorded here was performed.
Gwendolyn addresses a sense of kinship that resonates throughout this recording not only in the works but also among the musicians. Amidst them are siblings, musical partnerships, and decades-long academic relationships.
The complete GAIA Music Festival recordings are part of the Orchid Classics catalogue – view the full catalogue here

Kirill Troussov
Violin
Russian-born Kirill Troussov is widely recognised as one of the leading violinists of his generation. Collaboration with conductors such as Sir Neville Marriner, Vladimir Fedoseyev, Daniele Gatti, Lawrence Foster, Michail Jurowski, and Christoph Poppen, as well as with orchestras such as Staatskapelle Berlin, Leipzig Gewandhaus, Orchestre de Paris, Orchestre National de France, Radio Orchestra of Hessischer Rundfunk, and Munich Philharmonic Orchestra have brought him all over Europe and Asia. He carries the fascination of music history that seemingly connects all classical musicians, right down to the relationship he has with his violin. Kirill plays the Antonio Stradivari “Brodsky” of 1702, on which violinist Adolph Brodsky performed the world premiere of Tchaikovsky’s Violin Concerto in 1881, the year previous to Wieniawski’s death, whose Legend inspired the name of this programme.

Rachel Harnisch
Soprano
Celebrated Swiss soprano Rachel Harnisch gives guest performances at the world’s leading opera houses. She sings a wide concert repertoire from the passions of Johann Sebastian Bach to compositions of our time. She worked closely with Claudio Abbado until his death.
In the recent past, she has received role debuts as Rachel in Halévy’s La Juive, as Emilia Marty in Janácek’s Vec Makropolus, and in Aribert Reimann’s world premiere L’Invisible at the Deutsche Oper Berlin. The latter was so applauded that she was immediately invited to play the lead in Jenufa at the Deutsche Oper Berlin. Lieder recitals are particularly close to her heart, her constant partner here is the pianist Jan Philip Schulze, with whom she has recorded a much-acclaimed version of Hindemith’s Marienleben. There are numerous recordings that document her career.

Jan Philip Schulze
Piano
German pianist Jan Philip Schulze is a soloist, chamber musician and Lied accompanist, concertising all over Europe and the Far East. He is professor of Lied at the Hochschule für Musik und Theater Hannover. He has performed with Juliane Banse, Annette Dasch, Dietrich Henschel, Jonas Kaufmann, Yves Savary, Robert Dean Smith, and Violeta Urmana. His partnership with Rachel Harnisch is particularly vivid – he has played with her for more than twenty years. He has performed in renowned halls such as Concertgebouw Amsterdam, Théâtre de la Monnaie Brüssel, Wigmore Hall London, and La Scala Milan, as well as at the festivals in Lucerne, Salzburg, Edinburgh, and Munich. He is well-known for his interpretations of contemporary music, having played numerous premiere performances such as Iannis Xenakis’ Piano Concerto with the Sinfonieorchester des Bayerischen Rundfunks.

Gwendolyn Masin
Violin
Gwendolyn Masin is one of today’s significant concert violinists and an innovator for classical music. She performs internationally as a soloist, and in collaboration with musicians, artists, and orchestras. Notable partnerships include that with the Saint Petersburg State Symphony Orchestra, Bernese Symphony Orchestra, National Symphony Orchestra and RTÉ Concert Orchestra of Ireland, the Hungarian National Philharmonic, Savannah, and Georgia Philharmonic Orchestras, as well as Mihaela Martin, Kim Kashkashian, Vladimir Mendelssohn, Gary Hoffman, Natalie Clein, Torleif Thedéen, István Várdai, György Sebök, Cedric Pescia, Andreas Schaerer and Lukas Bärfuss, to name some. She enjoys a flourishing career that takes her all over Europe and the United States, as well as Asia, Russia, South Africa, and the Middle East. Gwendolyn is also very active as an educator, PhD researcher, author, and commissioner of new music. She has premiered works by, amongst others, Raymond Deane, Thorsten Encke, Don Li, Daniel Schnyder, Dobrinka Tabakova, and John Buckley, the latter of whom dedicated his first violin concerto to her.

Martin Moriarty
Viola
Irish violist Martin Moriarty enjoys an active career as a soloist and as a chamber musician both at home and abroad. As a soloist he has performed with orchestras including the Baden-Baden Philharmonic Orchestra and Amsterdam Sinfonietta. He recently gave the Czech Premier of James MacMillan’s Viola Concerto with the Karlovy Vary Symphony Orchestra.
Festival invitations include Verbier, West Cork, GAIA Music Festival,
Schiermonnikoog, Grachtenfestival, and Tsinandali Chamber Music Festivals.
Martin has collaborated with artists including Lawrence Power, Nobuko Imai, Adrian Brendel, Barry Douglas, Boris Garlitsky, Gwendolyn Masin, Garth Knox, István Várdai, Finghin Collins, Gabrielli Prokofiev, the Vogler and Michelangelo String Quartets. Martin regularly plays with orchestras such as the Mahler Chamber Orchestra, Irish Chamber Orchestra and is guest principal viola for Deutsche Kammerphilharmonie Bremen. He began his studies as a violinist before changing to viola under the tutelage of Ronald Masin and Maria Kelemen.

Patrick Moriarty
Cello
Cellist Patrick Moriarty is one of Ireland’s foremost young musicians and plays regularly both as soloist and as a chamber musician. He has performed in venues across Europe such as Wigmore Hall (London), Victoria Hall (Geneva), Muziekgebouw (Amsterdam), Musiikkitalo (Helsinki), and at festivals such as IMS Prussia Cove Open Chamber Music, West Cork Chamber Music Festival, and GAIA Music Festival. He has won numerous competitions and prizes such as the 70th Royal Over-Seas League Competition for Strings & Piano in London as well as the NEW FORMATS Project Prize 2022 in Graz. He has enjoyed recording projects at The Abbey Road Studios Institute as well as for BBC3, RTÉ lyric FM and VPRO.
Like his brother Martin Moriarty, Patrick’s immersion into music began at the Young European Strings School of Music in Dublin and lasted over a decade. His teachers there were Ronald Masin and Maria Kelemen, the parents of Gwendolyn Masin.