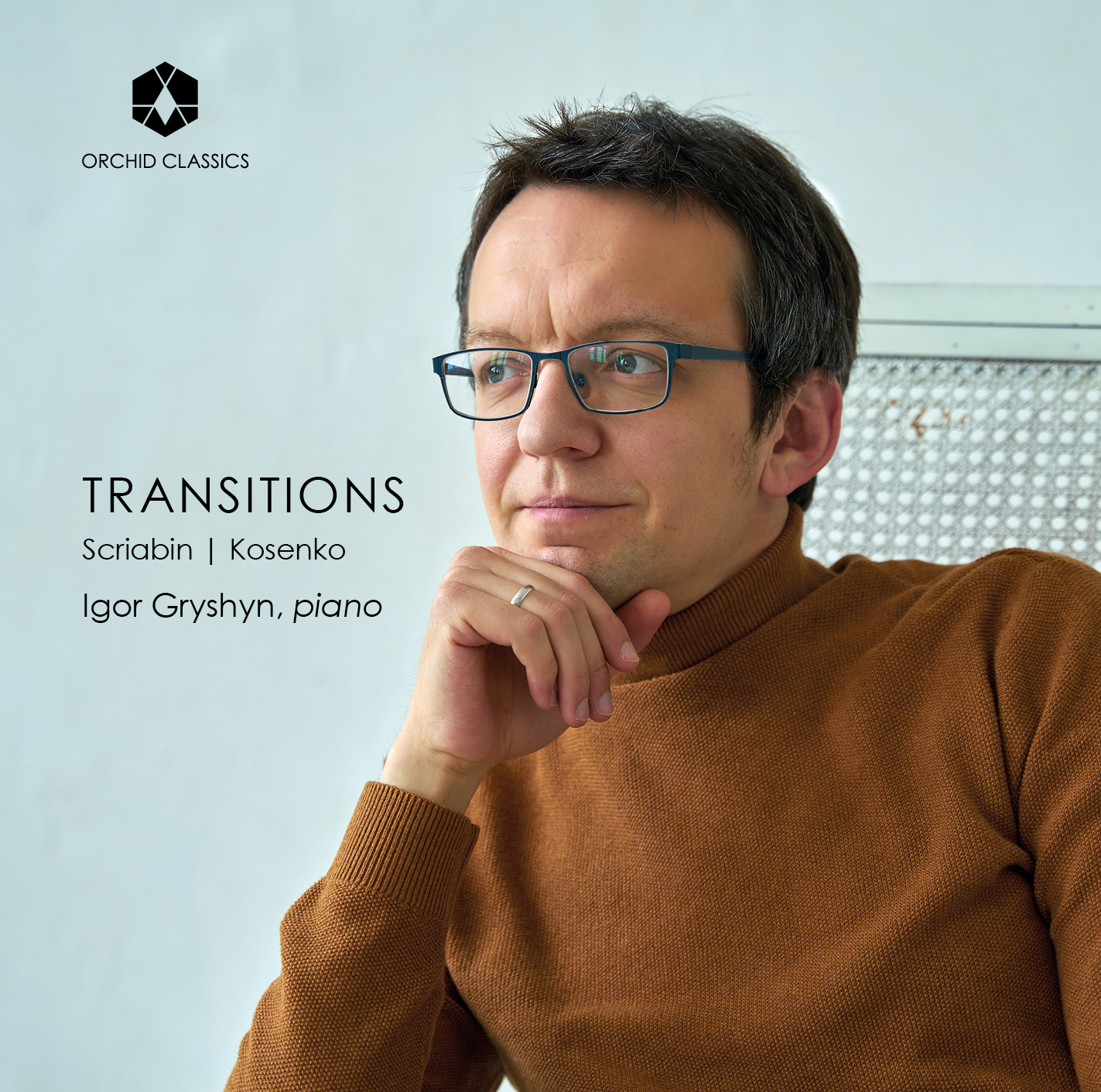 Ukrainian pianist Igor Gryshyn performs the music of one of his greatest compatriots, pianist-composer Viktor Kosenko, alongside repertoire by a figure who inspired Kosenko’s output: Russian composer Alexander Scriabin. 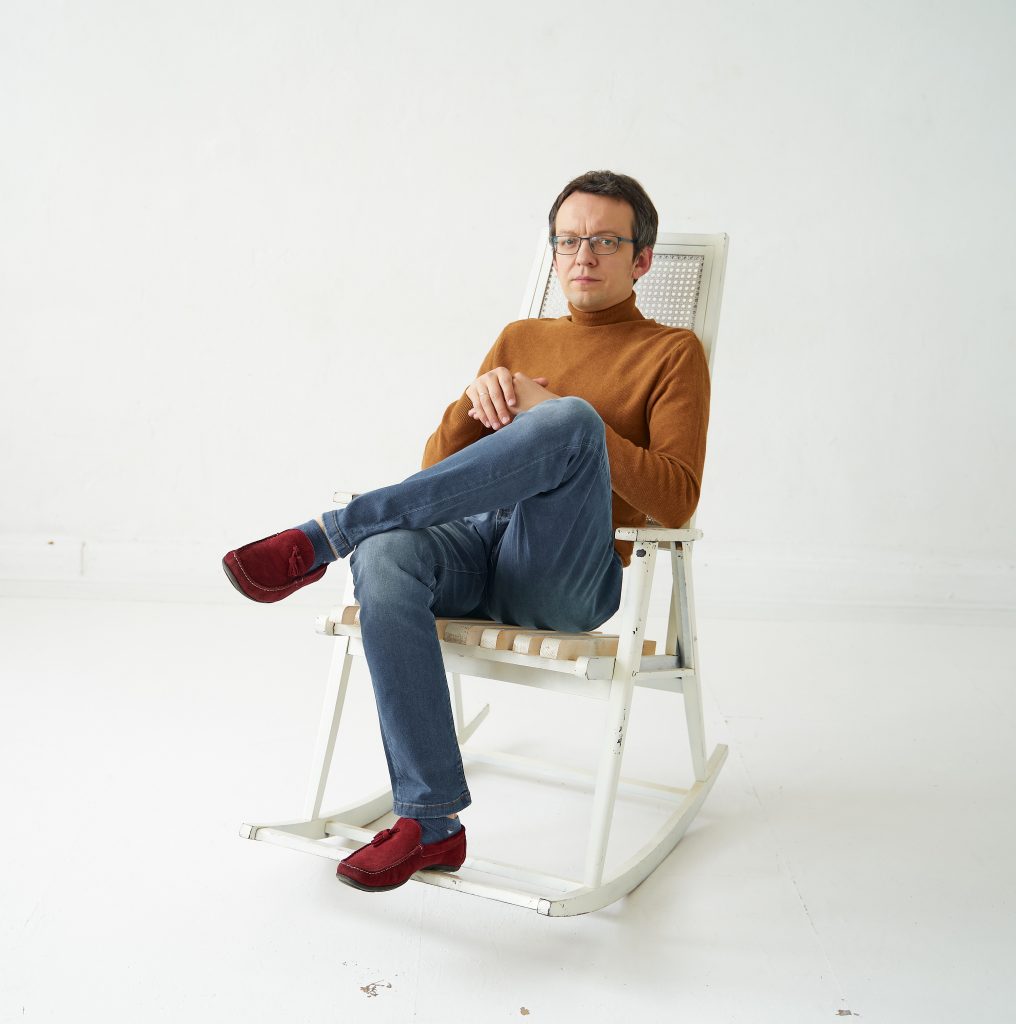 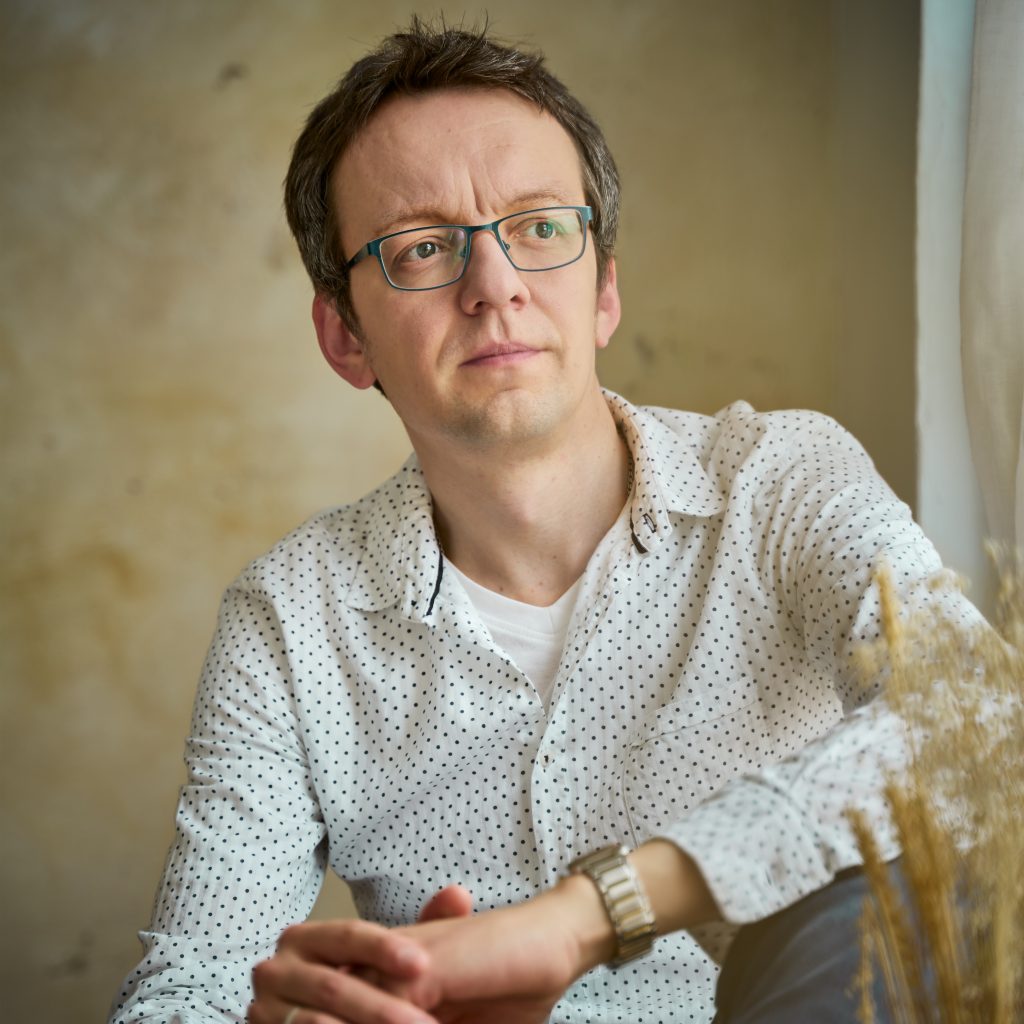 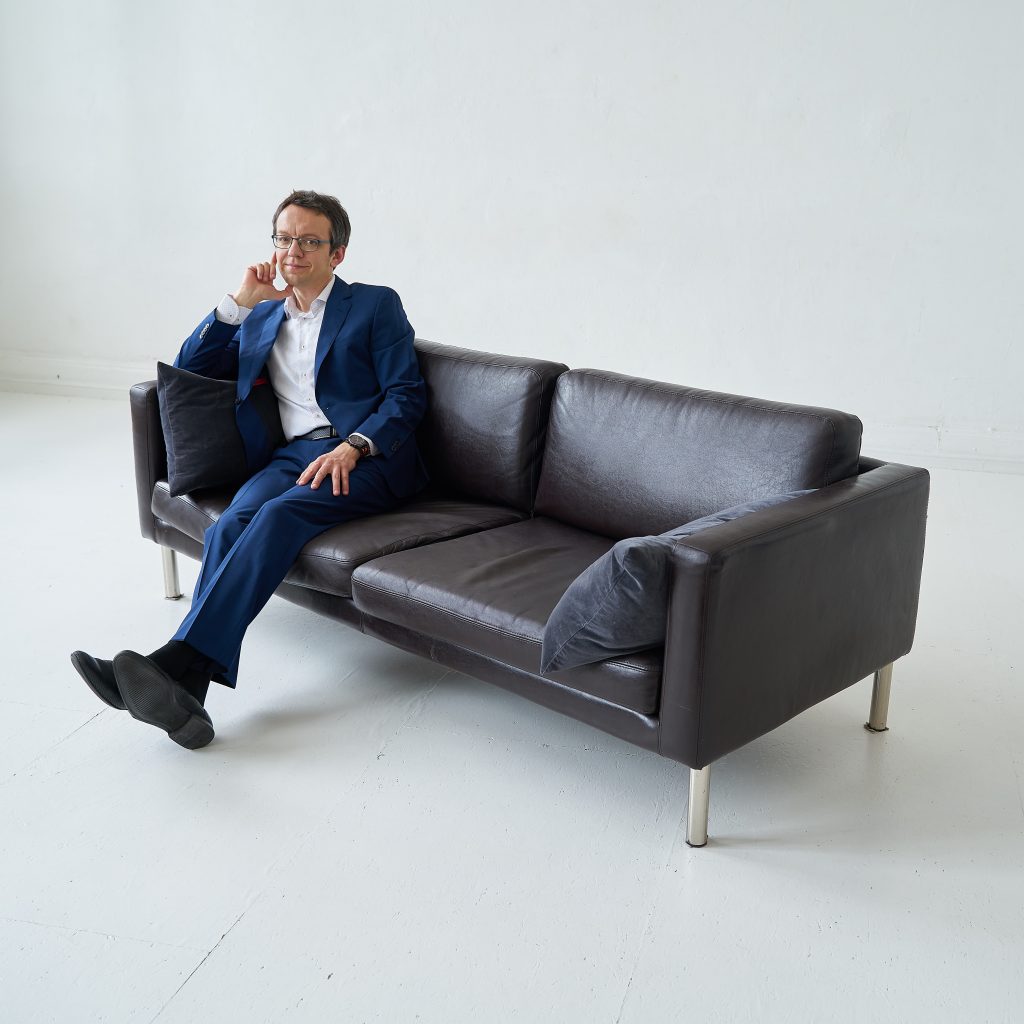 The personalities of Viktor Kosenko (1896-1938) and Alexander Scriabin (1872-1915) could scarcely be more different. Ukrainian composer-pianist Kosenko seems to have been unassuming to the point of selflessness. He studied composition and piano at the St Petersburg Conservatory, where pianist Iryna Miklashovskaya described him as a “talented musician, very modest and well-behaved”, and Glazunov applauded his “great pianistic and compositional abilities, and perfect pitch.” These concise phrases do not do full justice to Kosenko’s prodigious musical memory; at the age of nine he was able to perform Beethoven’s ‘Pathétique’ Sonata without music and entirely by ear, having heard his sister practising it, and similar feats – looking through scores and then playing them perfectly without a second glance – amazed his peers and professors. In 1920 he married Angelina Kanepp and wrote love letters to her every day. They lived in poverty in Kiev but Kosenko’s generosity was such that he invited others in off the street and gave them money, not thinking of his own deteriorating health; he died aged only 42.

Kosenko’s music was deeply influenced by that of his Russian contemporary Alexander Scriabin, who was also a precocious child, fascinated by the mechanics of the piano; he even tried building several of his own. They were both fine pianists; Scriabin made his debut in St Petersburg in 1894, performing his own compositions. But while Kosenko was self-deprecating, Scriabin was grandiose, with a narcissistic sense of his own visionary qualities enhanced by vivid synaesthesia. In an opera libretto conceived in 1901-03 he wrote: “I AM THE MAGICIAN OF A POWERFUL HEAVENLY HARMONY who lavishes caressing dreams on mankind… I am the apotheosis of world creation. I am the aim of aims, the end of ends.”
Kosenko wrote two sets of 11 études in 1922-23: his Études Op.8 and the ‘Eleven Études in the Form of Old Dances’, Op.19. Both sets coincide with Kosenko’s early successes as pianist and composer; he played his own works at his debut concert in Zhytomyr in September 1922, and within two years had been invited to Moscow where he met other prominent musicians. In 1929 he moved back to Kiev.
His admiration for Scriabin is audible in Kosenko’s Études Op.8, which begin with a study in G-sharp minor that exhibits chromatic fluidity and shifting colours, cramming an extraordinary amount of detail into a two-minute miniature. The second Étude, in B-flat minor, has the quality of film music (Kosenko would write the score to the film The Last Port in 1934) with its heady, jazz-influenced opening growing into full-blooded Romanticism. The recurrent dotted motif of the Étude No.3 in B minor seems to quote the music of a composer whose pieces Kosenko often performed: Chopin, specifically the famous ‘funeral march’ third movement of the Piano Sonata No.2.
Rachmaninov’s influence is apparent in the rugged Étude No.4 in D minor and in the passionate mood-changes of the Étude No.5 in C-sharp minor, but the latter is also more forward-looking in its block-like chords and stretching of tonality. The Étude No.6 in B is a lilting dream and, rather than breaking the spell in the next piece, Kosenko seems to extend and develop its atmosphere in a C major Étude of abundant ardour. The F-sharp minor Étude takes us on a dizzying journey from introspection to determination to release and back again, before the next Étude returns us to the key of the opening piece, G-sharp minor, which seems to have inspired Kosenko’s music of particular alacrity and intensity. C-sharp minor is the only other key to be repeated in the set, and its appearance in the haunting Étude No.10 heralds a funereal piece with a tolling pedal note underpinning rich chords. The final Étude, in E, is the only piece to include a subtitle, ‘First of May Holiday’ (or ‘May Day’), and the piece exudes a sunny jauntiness that resembles Gershwin’s style until Kosenko’s more characteristic billowing pianism takes over once again.
Kiev was one of many locations in which Scriabin composed between 1889 and 1896, others including Dresden, Heidelberg, Witznau, Amsterdam and Paris. In 1897 he married the pianist Vera Ivanovna Isakovich and began a six-year teaching post at the Moscow Conservatory, although he became frustrated that the role impeded his ability to compose, and he resigned in 1903.
Scriabin’s Four Preludes Op.22 date from the start of his teaching career and demonstrate the composer’s love of Chopin’s music – he used to sleep with the score of Chopin’s Preludes Op.28 under his pillow. Scriabin would later play down the impact Chopin had on his style, but his choice of forms in his early piano works – an array of nocturnes, waltzes, mazurkas, impromptus and preludes – renders the early connection undeniable. In the first English biography of Scriabin, published in 1923 and written by Alfred Swan (uncle of Donald Swann of Flanders & Swann fame), the author argues that “Scriabin is far from being a mere imitator. He is Chopin’s rightful successor, and, as such, carries to an extreme certain peculiarities of Chopin’s style”. For example, “the music grows in nervousness” and “the number of dissonances increases as a result of an almost boundless use of suspensions”. Even so, after about 1899 Scriabin’s attachment to Chopin faded and was supplanted by his burgeoning spiritual ambitions such as “a grand festival of humanity” uniting all the arts.
In the meantime, the prelude would become one of the most significant forms used by Scriabin throughout his career. They are often blink-and-you-miss-it concise – Tolstoy once said that Scriabin’s preludes were “short as a sparrow’s beak” – but, reflecting his synaesthesia, may be experienced as briefly-glimpsed, intensely colourful gems. Each of the Four Preludes Op.22 (1897) has something individual about it. The first, in G-sharp minor, ends on the dominant instead of the expected tonic, leaving the listener hanging; the second, in C-sharp minor, is remarkable for its chromaticism. In the third, in B, Scriabin uses the distinctive, limping mazurka rhythm, and the last prelude, in B minor, traverses the piano’s range in a series of peaked phrases with quick ascents and slower, more languid descents.
The year 1903 proved to be pivotal in Scriabin’s life: he left his teaching post, his publisher and mentor, Mitrofan Belaiev, died, and Scriabin and his wife decided to leave Russia, moving in 1904 to Switzerland – where they separated. The Sonata No.4 in F-sharp major, Op.30 was composed at this crossroads in the composer’s life, and the programme he wrote for the work offers an insight into his increasingly vivid spiritual and philosophical explorations at this time:

Thinly veiled in transparent cloud
A star shines softly, far and lonely.
How beautiful! The azure secret
Of its radiance beckons, lulls me …
Vehement desire, sensual, insane, sweet …
Now! Joyfully I fly upward toward you,
Freely I take wing.
Mad dance, godlike play …
I draw near in my longing …
Drink you in, sea of light, you light of my own self …

The soundworld of the first movement is suffused with the unresolved, erotic harmonies of Wagner’s Tristan Prelude; we are suspended in an intoxicating world of light that links the movement to the imagery used by Scriabin in his nocturnal, moonlit Second Sonata and starlit Third. The first movement shifts seamlessly to a vibrant Prestissimo volando that Scriabin wanted performed “as fast as possible, on the verge of the possible … it must be a flight at the speed of light, straight towards the sun, into the sun!” This echoes the ecstatic tone of the sonata’s music and the poem attached to it, and the work’s conclusion in turn seems to encapsulate much about Scriabin’s extreme, transcendental sense of himself and his music in relation to humanity and the cosmos: “I am transported by the gladness that is in me. If the world could only partake of an atom of the joy that is mine, the world would suffocate in bliss.”

Ukrainian pianist Igor Gryshyn performs the music of one of his greatest compatriots, pianist-composer Viktor Kosenko, alongside repertoire by a figure who inspired Kosenko’s output: Russian composer Alexander Scriabin.

This album brings Kosenko’s music into the spotlight and reveals a composer deserving of wider attention. Kosenko’s Études, Op. 8 brim with a wealth of ideas, encompassing the chromatic fluidity and shifting colours that show Scriabin’s influence with other stylistic traits ranging from full-blooded Romanticism to jazz. Scriabin’s Four Preludes, Op. 22 date from early in his career and demonstrate his love of Chopin’s music as he takes elements of Chopin’s style to new extremes of expression. The Sonata No. 4 in F sharp major, Op. 30 was composed at a crossroads in Scriabin’s life, and reflects his increasingly vivid treatment of music as a vehicle for his ecstatic, intoxicating visions.

German-Ukrainian pianist Igor Gryshyn studied piano under S. Polusmjak, A. Sevidov, H. Sahling and G. Fauth, all of whom have graduated from the Russian School of Pianists, such as R. Horowitz, L. Oborin, S. Feinberg and L. Vlassenko. An intensive period of studying under Vladimir Ashkenazy was particularly formative for him artistically. A lively musical exchange took place with the world-famous conductor and pianist, and several solo programmes were developed together.
Igor attended several masterclasses with Vladimir Krajnew, Leslie Howard, Konstantin Scherbakov, El Bacha and Vladimir Ovchinnikow before making his debut in 2005, when he graduated with honours as the youngest graduate in the history of the university at the Leipzig Gewandhaus.
Igor has won prizes at international youth competitions in Japan, Ukraine, and Germany. He has given concerts in music centres such as the Gewandhaus in Leipzig, the Gasteig Munich, the Tonhalle Zurich, the Steinway Hall and Wigmore Hall in London and the Moscow Philharmonic, as well as in South Korea, China, Spain, Malta, Lebanon, France, Holland, the Czech Republic, and Serbia. Igor is a juror at the international piano competition “Sirmuim Music Fest”.
As a soloist, Igor has performed with the Moscow Symphony Orchestra under Alexander Anissimov, the “Musica Viva” chamber orchestra under Alexander Rudin and the Kharkov Symphony Orchestra. Chamber music represents an important and indispensable part of his artistic work. Numerous recitals and programmes with the soprano Olena Tokar are documented by live and studio recordings by broadcasters such as BBC Radio 3 and BR, as well as the DVD production Eastern Romance.
Igor has recorded solo programmes with works by Bach, Ravel, Rachmaninov, and Prokofiev for MDR Kultur. In addition, a solo recording was produced on the Querstand label in cooperation with the Friends of the University of Music and Theater in Leipzig.
In recent years Igor has been a regular guest at concert series such as Art and Justice at the Federal Administrative Court in Leipzig, at the Mecklenburg Western Pomerania Festival, the Mannheim Palace Concerts, and the Leipzig Chopin Days.
Since 2011 Igor has been teaching piano at the Felix Mendelssohn Bartholdy University of Music and Theater in Leipzig. His masterclasses for young pianists have taken him to China, South Korea, and Lebanon.